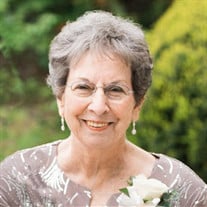 Yvette M. (Leger) Fortunato, 84, of Fitchburg, passed away peacefully in her home amongst family on January 14, 2020, after a full life centered on faith and family, Yvette was born in Fitchburg, December 1, 1935 a daughter of late Edmond and Elsie (Belliveau) Leger. She attended St. Joseph’s Elementary School. During the 1950's Yvette worked at Foster Grant Company in Leominster. She later worked sixteen years as a bookkeeper in the operations department at Safety Fund National Bank in Fitchburg before retiring in 2000. She is survived by her two daughters, Brenda Proctor and her husband James of Lunenburg, Carol Buonpane and husband Giovanni of Stoneham; several nieces and nephews; three granddaughters, Maria Sullivan her husband Daniel of Billerica, Christina Buonopane of Stoneham and her companion Matthew Carvalho of Chicopee, Rachel Proctor of Lunenburg and a great-granddaughter, Sienna Yvette Sullivan. She is predeceased by her husband of 32 years, Patsy J. Fortunato, who passed away in 1989 her sister, Doris R. Carbone who died in 1991, her brother, Francis E. Leger in 1987 and her brother-in-law, John Carbone who died in 2012. She loved her family and was devoted to the Catholic faith all her life. Her devotion to her Catholic Faith was a source of comfort all her life. She was a strong and independent woman who always put the welfare of others before her own. Yvette was a member of St. Joseph’s Church and former member of Madonna of the Holy Rosary Church. She belonged to Our Lady Rosary Makers of which had made over 3,000 sets of Rosary Beads that are distributed to the missionaries and veterans. She was also an active member of the Sodality of St. Anne. She was known as Grammy to her grandchildren. She enjoyed cooking, was a meticulous seamstress, cake decorating, word puzzles, anything related to numbers and especially enjoyed cultivating her vegetable garden and taking care of her flowers. She also enjoyed doing cross stitch. Four of her cross-stitch masterpieces will be on display during the visitation services. She was an avid follower of the National Football League with her favorite team being the New England Patriots. Purple was her favorite color, roses her favorite flower and she enjoyed collecting Santa Clauses. Her patron Saint was Saint Jude. Her funeral Mass will be celebrated at 11:00 am, Monday, January 20th at St. Joseph’s Church, 49 Woodland Street, Fitchburg. Burial will follow in the parish cemetery. A visitation period from 9:30 am – 10:30 am Monday in the Isabelle & Anderson Funeral Home, 316 Clarendon Street, Fitchburg. Memorial donations may be made to the St. Jude Children’s Research Hospital, 501 St. Jude Place, Memphis, TN 38105

Yvette M. (Leger) Fortunato, 84, of Fitchburg, passed away peacefully in her home amongst family on January 14, 2020, after a full life centered on faith and family, Yvette was born in Fitchburg, December 1, 1935 a daughter of late Edmond and... View Obituary & Service Information

The family of Yvette M. (Leger) Fortunato created this Life Tributes page to make it easy to share your memories.

Send flowers to the Fortunato family.