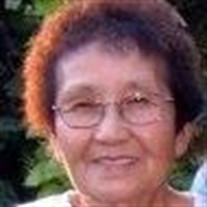 SHIRLEY; Yoshiko S. “Josie” Hook, 82, of Shirley died Saturday, March 9, 2019 at her home. Her husband, Paul F. Hook, died in 1989. Josie was born in Sendai, Japan, October 21, 1936 the youngest of nine children and has resided in the Ayer and Shirley area for over 50 years. To some she was Josie, others she was Gramma and to her great grandchildren she was Gaga. Whatever name she went by she was truly an amazing woman. She worked many years at Bemis Bag in Pepperell and Samson Cordage Company in Shirley. She very much enjoyed spending time with her family. She leaves two daughters and sons in law, Joyce and Bob Addonizio with whom she resided in Shirley, Mary and Walter Harms of Amherst, NH; four grandchildren, Alyson and Michael Racca of Lunenburg, Theresa and Jimmy Gendron of Leominster, Matthew and Katelyn Addonizio of Gardner, Timothy Harms stationed with the USAF; five great grandchildren, Brandon Gendron, Jonathan Gendron, Jaxon Racca, Xander Racca, and Mikayla Addonizio. Josie’s family extends their heartfelt thanks to the nurses and caregivers of Nashoba Nursing and Hospice Service. Their kindness will always be remembered. Private services will be held at Village Cemetery, Shirley in the spring. There are no calling hours. The Anderson Funeral Home, 25 Fitchburg Rd, Ayer is assisting the family with arrangements.

The family of Yoshiko S. Hook created this Life Tributes page to make it easy to share your memories.

Send flowers to the Hook family.