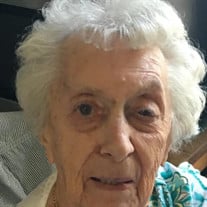 FITCHBURG: Yolande (Bougie) Richard, 98, a resident of Fitchburg for nearly 70 years, died Thursday, September 30, 2021 at Manor on the Hill, Leominster. Mrs. Richard was born in Montreal, Quebec, Canada, March 6, 1923, a daughter of Jean and Cecile (Raucort) Bougie and moved to Fitchburg in 1952. For twenty years, Mrs. Richard worked as a floor worker at Foster Grant Company in Leominster, retiring in 1986. She was a member of St. Joseph’s Church as well as its Ladies of Ste. Anne. She was also a member of the American Friendship Club and the Fitchburg Booster Club. She leaves her son, J. Michael Richard of Ft. Benning, Georgia; four grandchildren, Travis, Robert, Heidi, Michael and five great grandchildren. She was predeceased by her son, Robert Richard of Fitchburg in 1982 and her former husband, Wilfred Richard who died in 1985 and two sisters, Jeannette Limoges and Jacqueline Gravel both of Canada. Services of remembrance will be held 10 AM Thursday October 14, 2021 at the Pieta Chapel at St. Joseph Cemetery, 486 Clarendon Street, Fitchburg. The Isabelle & Anderson Funeral Home, 316 Clarendon Street, Fitchburg is assisting the family with arrangements. For additional information or to leave an online condolence please visit their website at www.andersonfuneral.com.

The family of Yolande (Bougie) Richard created this Life Tributes page to make it easy to share your memories.

Send flowers to the Richard family.