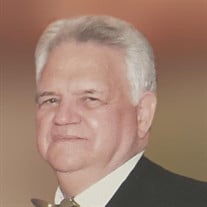 SEMINOLE, FL: William A. Scharf, 88, of Seminole, FL, formerly of CT, died Friday, June 19, 2020 at his home in the loving care of his children. His beloved wife of 64 years, Jean Bergeron Scharf died in 2018. Mr. Scharf was born on November 14, 1931 and grew up in Bridgeport, CT, the second son of August and Elizabeth. He attended Bassick High School and earned his Associate’s degree at the University of Bridgeport. He served his country in the United States Navy Reserves from 1950 through 1958. Mr. Scharf worked much of his career as a metallurgical quality control engineer in the aviation and aerospace industry. Through the years he rose through the ranks of several companies including United Technologies, Sikorsky Aircraft in Stratford, CT and Pratt & Whitney in East Hartford, CT. As a result of his career, Mr. Scharf relocated frequently, residing in Bridgeport, Stratford and Woodstock CT, Hopatcong NJ, Nagoya Japan and Levittown PA before finally retiring to Seminole, Florida. Known and celebrated for his ability to tell tales and make people laugh, he is remembered fondly by friends and family alike. Mr. Scharf is survived by his son, Gary Scharf and his wife, Dorothy Eden of Media, PA; two daughters, Diane Scharf and Laurie Kassel Kelly both of Sandwich, MA. He was affectionately known as “Grampy” to his three grandchildren, Anna Scharf, Victoria Scharf and Rachel Kassel Berg, and his two great grandchildren Skyler Kassel and Gunner Berg. He was the remaining brother of John Scharf of NV, Harry Scharf of CT, and Joseph Scharf of CT and was also predeceased by his son in law, Dennis G. Kelly of Illinois. A funeral Mass will be celebrated 11 AM Friday, June 26, 2020 at St. Joseph’s Church, 49 Woodland Street, Fitchburg. Burial will be in St. Joseph’s Cemetery, 486 Clarendon Street, Fitchburg MA. A visitation period from 4pm to 7pm FRIDAY will be held at the Isabelle & Anderson Funeral Home, 316 Clarendon Street, Fitchburg. For additional information or to leave an on line condolence please visit www.andersonfuneral.com

SEMINOLE, FL: William A. Scharf, 88, of Seminole, FL, formerly of CT, died Friday, June 19, 2020 at his home in the loving care of his children. His beloved wife of 64 years, Jean Bergeron Scharf died in 2018. Mr. Scharf was born on November... View Obituary & Service Information

The family of William A. Scharf created this Life Tributes page to make it easy to share your memories.

Send flowers to the Scharf family.