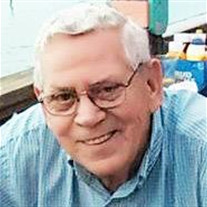 William A. Roberts, 76, of Hudson, FL, former longtime resident of Townsend, died peacefully surrounded by family Sunday, April 28, 2019, in Newport Richey, FL. He was born in Lowell, MA on May 18, 1942, a son of the late Herbert and Bertha (Lindquist) Roberts. He was a 1960 graduate of Tewksbury High School and had resided in Townsend for over 50 years before moving to Florida recently. Bill was a self-employed realtor throughout the area for many years prior to his retirement. Prior to that Bill was a Bakery Manager and was self-employed owning a number of restaurants. He enjoyed vacations at the beach, trips to Lake Winnipesaukee, his model car collection, singing Karaoke and playing Dominos with his friends in Florida, and working in his garden. Bill was active in the community and with his church for many years including the school committee and coaching Little League. He was an avid Red Sox fan. His first wife Carol (Burgess) Roberts died in 2014. He leaves his second wife, Mary Flora (Hale) Roberts of Hudson, FL; two sons, Troy Roberts and his wife Jannine of Pepperell and Dana Roberts and his wife Shauna of Townsend; a brother Herbert Roberts, Jr., of Villages, FL, two sisters, Ethel Holden of Wilmington and June Brady of Hudson, FL; a daughter-in-law, Debra Roberts of Ashby; three grandchildren, Justin, Samantha and Sydney and several nephews and nieces. He will also be missed by long-time friend Paul Zadrozny of Leominster, MA and his companion Missy the Cat. He is predeceased by two sons, Glenn Roberts who died in 2013 and Lee Roberts who died in 1972. His funeral service will be held on Wednesday, May, 8, 2019 at 11AM in the T.J. Anderson & Son Funeral Home, 250 Main St., Townsend. Burial will be in the Hillside Cemetery. Calling hours in the Funeral Home will be held on Tuesday, May 7, 2019 from 5 to 7 PM. In lieu of flowers memorial contributions may be made to the Glenn A Roberts Scholarship Fund at the Community Foundation of North Central at Massachusetts https://www.cfncm.org/GiveiCurrentFutureDonorsi/DonateOnline.aspx.

William A. Roberts, 76, of Hudson, FL, former longtime resident of Townsend, died peacefully surrounded by family Sunday, April 28, 2019, in Newport Richey, FL. He was born in Lowell, MA on May 18, 1942, a son of the late Herbert and Bertha... View Obituary & Service Information

The family of William A. Roberts created this Life Tributes page to make it easy to share your memories.

Send flowers to the Roberts family.