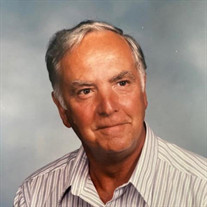 William "Bill" A. Profit, 92, of Townsend, died Saturday morning, May 8, 2021 at the Apple Valley Center in Ayer. Bill was born in Fitchburg, MA on July 29, 1928 a son of the late William and Gertrude (Chalifoux) Profit and has resided in Townsend since 1956. He was a United States Army veteran having served during the Korean Conflict as an electronics and communication technician in Germany. Following his honorable discharge and service to our country, he returned to his job at Fitchburg Gas and Electric Light Company where he met the love of his life - his wife of nearly 68 years, Glenda C. (Hamel) Profit. William owned and operated the Profit TV Service Company from 1965 until his retirement in 1984. He would joke that he had visited nearly every residence with in a thirty-mile radius of his home - as there was no bigger household crisis back in the day, then when your television was not working. Bill was a member of Saint John’s Parish and the Townsend VFW. He enjoyed a good afternoon of BBQing or cooking a pot of lobsters. Bill spent many winters on the back of a snowmobile and summers on the beach at their home in Wells, Maine. He was a master of glue and duck-tape and considered a true “McGuyver” as there was not anything he could not fix. Most of all Bill loved his family. In addition to his wife Glenda of Townsend, he leaves two sons, William (Scott) Profit and his wife Laurie of Boothbay Harbor, ME, David Profit and his wife Debbie also of Boothbay Harbor and a daughter, Debra L. Evans of Townsend. Additionally, he leaves five grandchildren Becky Mearles, of New Ipswich NH. Harmony Evans of Gardner, MA and Justin Evans of Ashby MA, Miranda Fraclose and Deanna Profit of Yardley, PA., eight great grandchildren, three great-great grandchildren, and several nephews and nieces. He is predeceased by two sisters Audrey Strobel and Marcella Fregeau. A graveside service with military honors will be held on Friday, May 14 at 11 AM at the Hillside Cemetery in Townsend. The TJ Anderson & Son Funeral Home, 250 Main St., Townsend, is assisting the family with the funeral arrangements. For further information or to leave an online condolence please visit their website at www.andersonfuneral.com In lieu of flowers memorial contributions may be made to the Townsend VFW Post 6538

William "Bill" A. Profit, 92, of Townsend, died Saturday morning, May 8, 2021 at the Apple Valley Center in Ayer. Bill was born in Fitchburg, MA on July 29, 1928 a son of the late William and Gertrude (Chalifoux) Profit and has resided in Townsend... View Obituary & Service Information

The family of William A. Profit created this Life Tributes page to make it easy to share your memories.

Send flowers to the Profit family.