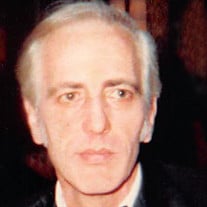 ASHBURNHAM: William R. Grenier, 83, of Ashburnham, formerly of Fitchburg, died Saturday, September 7, 2019 at Gardner Rehabilitation and Nursing Center, Gardner. His wife, Lorraine (Turcotte) Grenier died in March 2000. Mr. Grenier was born in Fitchburg, March 12, 1936, a son of Raymond and Blanche Grenier and resided much of his life in Fitchburg before moving to Ashburnham. He was a member of St. Joseph’s Church, Fitchburg, and St. Dennis Church, Ashburnham. He enjoyed watching his sons and grandsons playing hockey and was an avid vintage car enthusiast. He worked as a papermaker at Crocker Technical Papers in Fitchburg for 45 years. He served his country in the United States Army. He leaves two sons, Steven W. Grenier of Ashburnham, Bruce R. Grenier of Hudson, NH; two daughters, Nancy A. Heagy of Pennsylvania, Jane L. Johnson of Gardner; nine grandchildren, and ten great grandchildren. In addition to his wife he is predeceased by his daughter, Joanne E. Grenier of Fitchburg who died in 1983; a sister, Anne Assimakopoulos, and a brother, Vincent Grenier. His funeral service will be held on Friday, September 13, at 10AM in the Isabelle & Anderson Funeral Home, 316 Clarendon Street, Fitchburg. Burial will be in St. Joseph’s Cemetery. Mr. Grenier’s family will receive family and friends at the funeral home prior to the service on Friday morning, form 9 to 10AM For additional information or to leave an on-line condolence, please see www.andersonfuneral.com

The family of William R. Grenier created this Life Tributes page to make it easy to share your memories.

Send flowers to the Grenier family.