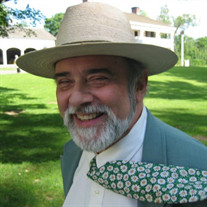 William "Bill" Hammersley Cory, 75, of Clinton and formerly Harvard -- entrepreneur, connoisseur, restaurateur, raconteur -- died peacefully at home following a period of illness, surrounded by his loving family on Sunday, August 26, 2018. Born March 3, 1943 in Canajoharie, New York, Bill was the son of Michael Phillip Cory, a practicing attorney and Priscilla (Hammersley) Cory. Both parents predeceased him. In 1968 he met and married Cheryl "Sherry" (Elliott) Cory in Boston ; they celebrated their 50th wedding anniversary this past June, having resided in Harvard for 30 years. Bill leaves a son, Michael "Mike" Cory and his wife Junko (Matsunami) of Brooklyn, NY (who were married by Bill's bedside for him to proudly witness); a daughter, Amanda "Mandy" Glover Lamb of Norridgewock, Maine; and a sister, Faith (Cory) Griffiths and her husband, Philip Griffiths of Canajoharie, NY. Additional close family survivors include in-laws Faith (Elliott) Tobin and her husband, William Tobin of Sanbornton, NH; and Lynda (Elliott) Swenson and her husband, Lennart Swenson of Center Harbor, NH; along with six nieces and four nephews. Bill spent two years at Canajoharie High School and the next two years at Loomis Chaffee Academy in Windsor, CT. He attended Boston University as well as the University of California at Los Angeles, where he majored in Business Education. Bill had a unique and diverse career -- from managing movie theaters (he was a projectionist at Canajoharie in 1955, at age 12; and while in college he managed a Los Angeles Cinema); to automobile showrooms from 1962-67 (Sales V.P. for Saab Motors in Watertown at age 19); to ownership and management of the Roundup Western Family Steak Houses from 1968-81 (in both Watertown and Worcester locations); to operation of Cornucopia Furniture Company from 1975-98, during which period (1984) he under-took possession and development of Harvard's "AppleWorks" facility -- encompassing storefronts, medical and dental offices, research & development units, machine shops, and military storage for Fort Devens; from that same location (1991 through 1998) Bill, together with "soup goddess" Sherry, owned and operated the Bushels Deli. Sidelines for Bill included making voice-over recordings for TV; writing restaurant reviews for The Worcester Telegram & Gazette for 20 years; and consulting (2004-06) for Sundance Publishing of Littleton. He devoted many hours as a bell-ringing "Santa Claus," collecting donations for the Salvation Army at holiday time. He participated in an old Harvard tradition of delivering early presents from "Santa" to children around town on Christmas Eve. He served on the town's Land Use Committee; he was a member of the Finance Committee of Harvard Unitarian Universalist Church; he was long active with the CMED Life Flight programs; he co-chaired the parade for Harvard's 250th Celebration in 1982; and he and Sherry participated on the 4th of July Committees. Bill's interests included many and varied fields -- but chief among them always were his 5 favorite "F" words: FAMILY, FRIENDS, FILM, FOOD, and FURNITURE. He was known to engage in extended phone conversations with family and friends. His idea of Family Fun Sundays was seeing a good film and discussing it at supper. His owning three restaurants, writing articles as a restaurant reviewer, and judging for years the fundraiser, "Tastes of Our Towns," indulged his utter enjoyment of food. His overseeing operation of Cornucopia Furniture entailed attending auctions and seeking out crafts persons to create early American, fine-finished reproductions. As for the "3-Rs:" READING, (W)RITING and, in Bill's case, RHETORIC. He most enjoyed histories about the Making of America -- second only to spy novels. He wrote columns for The Harvard Post, The T&G, and multiple Cornucopia catalogs. He spoke with a deep, clear baritone voice at annual ecumenical Christmas Pageants, 4th of July Celebrations, UU Church Auctions; and was honored to deliver eulogies for prominent Harvard residents, among them Jack Mannix, Bill Mead and Charlie Waite. On the homefront, Bill and Sherry hosted Apple Cider-pressing parties at Harvest Time; an Open House of Chili-feasting on New Year's Day; an impromptu youth hostel during the children's teenage years; and several breakfast clubs, coffee clatches, and supper clubs over decades. As for the national pastime, Bill rooted initially for the Brooklyn Dodgers, but later (and longer) for the Boston Red Sox. He "rallied" in Car-driving (through 24-hour endurance races in New York State and Canada). He and Sherry traveled extensively: Scandinavia, Great Britain, Belgium, the Virgin Islands, Vancouver, and almost everywhere in the United States (except what's known as the Heartland). Bill favored Dixieland Jazz and Folk music. Although he never performed actual military service, Bill had several Army buddies from Fort Devens who remained life-long friends. In retirement he and brother-in-law Bill Tobin liked to play the roles of a couple of cantankerous geezer/curmudgeons -- as inspired by the Muppets characters, Statler (Hilton) and Waldorf (Astoria) -- "always "commenting about people's performances and predicaments from up in the balcony." How he will be missed! A memorial for Bill is to be held at the Harvard Unitarian Universalist Church on Sunday, September 9th, at 2 o'clock. A reception at Sutherland Hall will follow the services. Per the family's request, in lieu of flowers, donations may be sent in memory of Bill to the Salvation Army. The Anderson Funeral Home, 25 Fitchburg Rd., Ayer is assisting the family with arrangements. Please see www.andersonfuneral.com for additional information or to leave an e-condolence.

The family of William H. Cory created this Life Tributes page to make it easy to share your memories.

Send flowers to the Cory family.