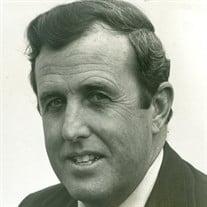 GROTON: William (Bill) C. Conley, a pioneering leader in the Black Angus cattle business and veteran of World War II, of Groton, died peacefully at his home on October 24, 2019. He was raised in Enfield, CT by his parents, the late Herbert and Helen (Denham) Conley and married to Norma (Smyth) Conley for nearly sixty years. Like Norma, Bill’s family also raised tobacco in the Connecticut River valley after immigrating to the US in the mid-1800’s. After working on farms picking tobacco leaves as a child and graduating high school in Enfield in 1942, Bill enlisted in the U.S. Navy in early 1943. He was then selected to attend highly specialized industrial gases training at the Ford Motor Company in Dearborn, Michigan. One of his fondest memories was of meeting Henry Ford himself, the forefather of the modern auto industry and eighty years old at the time, who shook Bill’s hand as thanks for donating blood to the war effort. Upon completion of training at Ford, Bill was among a select group of graduates chosen to continue their advanced training that would eventually lead to an assignment crucial to advancing the Pacific fleet on their long journey towards Japan and the end of the World War. Initially assigned to a unit in the Solomon Islands, he was part of a mission that included supporting the repair of aircraft carriers and other ships damaged in the attack at Pearl Harbor as well as the navy cruiser U.S.S Boise, which shortly thereafter carried General Douglas MacArthur on his return mission to the Philippines in 1944. His stories of the war will be missed by all. When the war ended, he was transferred to the Charlestown Navy Yard in Boston, then on to Brooklyn, NY, where he was discharged in 1946. Bill was awarded several medals recognizing his service during the war effort. Shortly after his discharge, he returned to Enfield and soon enrolled at the University of Connecticut, where he majored in Animal Science. It was during this time at Storrs in 1948 that he married Norma Smyth, his school classmate for several years and member of Enfield’s Smyth Farm dairy and tobacco family. As Bill excelled in his studies and approached graduation, Mrs. Marion D. Campbell, a descendant of the founder of International Harvester, approached him about assuming the leadership of a new Black Angus cattle operation she had founded at Gibbet Hill Farm in Groton, MA. This was the genesis of Bill’s long and illustrious career in the beef industry starting in 1950. During his career, Bill was instrumental in leading efforts to improve how farmers raised animals and brought this knowledge to farmers around the globe by visiting the Soviet Union in 1965 as well as Scotland, New Zealand, Australia, South Africa and dozens of other countries. Under his leadership, Gibbet Hill Farm became the gold standard in the Angus cattle business, selling progeny in forty-seven states and in many foreign countries. Descendants of the cattle Bill raised in Groton are heavily sought after to this day. The overwhelming support he received from colleagues in the industry led to his election as president of the American Angus Association in 1983. One of Bill’s proudest achievements while part of the leadership in the Angus business, was his participation in the creation of the Certified Angus Beef program in the late 1970’s, which is now a globally recognized brand some forty years later. As he began his journey in leading the Angus Association, Bill purchased farmland near St. Joseph, Missouri which is now the home of Conley Angus Farm, where sons Bill and Timothy Conley currently reside and raise hundreds of purebred Angus cattle. Later in life as the Gibbet Hill Farm operation wound down operations following the death of Mrs. Campbell, he led efforts to preserve the farm for future generations to enjoy. He was instrumental in working with local residents and town government to put the farmland into a public trust and avoid commercial development of one of largest and oldest farm operations in the Northeast. Upon his retirement in 2003 and his beloved wife Norma’s death in 2008, Bill continued to serve as an advisor to his sons, grandchildren and others in the cattle business and regularly enjoyed the company of his daughter Barbara Beyer and her husband Carl, sons William Conley and his wife Donna, Timothy P Conley and his wife Tammie of Clarksdale, MO, Richard Conley of Watertown, MA and his sister Jean Morrison of West Hartford, CT. He is also survived by eight grandchildren and four great grandchildren. Private services will be held for Bill at the Groton Cemetery on November 9th. In lieu of flowers, donations may be made in his memory to the Leukemia and Lymphoma Society. The Anderson Funeral Home, 25 Fitchburg Rd, Ayer is assisting the family with arrangements.

GROTON: William (Bill) C. Conley, a pioneering leader in the Black Angus cattle business and veteran of World War II, of Groton, died peacefully at his home on October 24, 2019. He was raised in Enfield, CT by his parents, the late Herbert... View Obituary & Service Information

The family of William C. Conley created this Life Tributes page to make it easy to share your memories.

GROTON: William (Bill) C. Conley, a pioneering leader in the...

Send flowers to the Conley family.