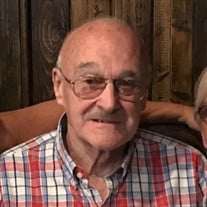 SHIRLEY: William H. Anderson, 86 of Shirley, formerly of Lexington and Littleton, died Wednesday evening, July 3, 2019 at St. Elizabeth’s Hospital. Brighton. Mr. Anderson was born in Corinna, Maine, February 13, 1933, a son of Helge and Juanita (Early) Anderson and resided in Lexington and Littleton before moving to Shirley 18 years ago. He graduated from Lexington High School and attended Boston University. During the Korean Conflict, Mr. Anderson served his country for four years in the United States Air Force. For thirty years, he worked as a salesperson at Acorn Structures in Acton before retiring in 2000. He was an avid fly fisherman, enjoyed traveling and watching the Boston Red Sox. He leaves his wife of 28 years, Sandra L. (Pillsbury) Anderson; a son, Jeffrey B. Anderson of Brookline; three daughters, Lorrie Anderson and her husband Conant Brewer of Brookline, Linda Anderson and her fiancé Darren Copper of Fitchburg, Kirsten Cogan and husband Kevin of Clinton; a step son, Sean Fleming and wife Becky of Whitinsville; one step daughter, Kendra Fleming and her partner Mark Fanelli of Fitchburg; 14 grandchildren; Michael and Christina Anderson; Woody, Earl and Jenna Anderson-Brewer; Andrea Vana and Danny Patrikis; Breanne and Haley Cogan; Lacey and Joshua Collins, Rachel and Dylan Fleming and Nicolas Larkin and several great grandchildren. He was the brother of the late Joan Gardner of North Reading. Funeral services will be held 11 Am Wednesday, July 10th at Anderson Funeral Home, 250 Main Street (Rte 119) Townsend Center. Burial will be in Hillside Cemetery. Mr. Anderson’s family will receive family and friends on Wednesday at the funeral home from 10 AM until the time of the service. In lieu of flowers donations can be made to the Alzheimer's Foundation of America 322 8th Avenue, 16th floor, New York, NY 10001.

The family of William H. Anderson created this Life Tributes page to make it easy to share your memories.

Send flowers to the Anderson family.