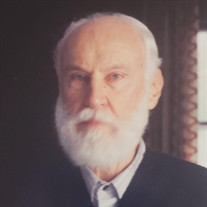 HARVARD; Warren L. Henderson, 86, of Harvard, formerly of Groton, passed away on Sunday, May 10, 2020, from complications of COVID-19. Warren was born in Melrose, Massachusetts on October 10, 1933, a son of Lawrence B. and Regina M. (Amazeen) Henderson. He attended Northeastern University in Boston, Massachusetts where he earned a Batcheler’s degree in accounting. Following graduation, he served his country in the United States Air Force during the Korean Conflict. He met Barbara Adams through mutual college friends, married in 1959, with whom he raised four children. Warren worked as a systems analyst at several companies including Raytheon, Simplex and General Electric. He and his wife Barbara were active members of the Harvard Unitarian Universalist Church for many years. One of his favorite church activities was the annual auction and dinner, in addition to Sunday services and social gatherings. Throughout his life, Warren had a love of the arts. From paintings by Andrew Wyeth to Chinese artifacts, he would learn about the artist and the medium that was used. Classical music was something Warren thoroughly enjoyed. He cherished attending performances at Indian Hill Chamber Music throughout the years and the Vermont Mozart Festival during summers. He loved baseball and enjoyed watching the Red Sox games as well as playing in a local league. He enjoyed spending time during hot summer days swimming, playing cards, vacationing on cape cod and the islands. Warren was a devoted husband and loved his wife Barbara. He enjoyed visiting with his children with extended family gatherings. He was very proud of his grandsons Travis and Benjamin pursuing college educations. Warren is survived by his wife, Barbara E. (Adams) Henderson of 61 years; two sons, Keith S. Henderson and his wife, Michelle of Ayer; Stan R. Henderson and his wife, Robin of Chelmsford; two daughters, Gail L. Henderson-King and her husband, Daniel of Shelburne, VT; and Lynne V. Henderson Searle and her husband, Keith of Pepperell; and grandchildren Benjamin King, Travis Henderson, and Eric Searle. Due to restrictions imposed by the current health crises, no service is planned at this time. A Memorial Service will be scheduled at a later date. Contributions in Warren’s name may be made to the Harvard Unitarian Universalist Church, 9 Ayer Street, Harvard, MA 01451. The T.J. Anderson & Son Funeral Home, 25 Fitchburg Rd. Ayer is assisting the family with the funeral arrangements.

HARVARD; Warren L. Henderson, 86, of Harvard, formerly of Groton, passed away on Sunday, May 10, 2020, from complications of COVID-19. Warren was born in Melrose, Massachusetts on October 10, 1933, a son of Lawrence B. and Regina M. (Amazeen)... View Obituary & Service Information

The family of Warren L. Henderson created this Life Tributes page to make it easy to share your memories.

Send flowers to the Henderson family.