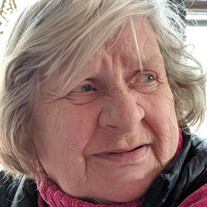 FITZWILLIAM, N.H. -- Violet Stanway, 82, died Thursday, September 9, at her home in Fitzwilliam, N.H., surrounded by her loving family. She leaves three sons, Eric Stanway, of Fitzwilliam, NH; Philip Stanway, of Chelmsford, Mass.; Julian D. Stanway, of Rindge N.H., as well as five grandchildren and one great-grandchild. She is predeceased by her husband, Eric Stanway, who died in 2000. Mrs. Stanway was born in Manchester, England, the daughter of the late Donald and Violet (Barlow) Partridge. She spent most of her childhood in the Blitz, enduring nightly attacks by the German Airforce. In her teen years, she spent many evenings dancing in various venues around Stockport, where she met her husband. They married in 1957, forging a marriage that would last 42 years. In 1966, the family relocated to Seattle, Washington, where her husband secured a position at Boeing as an aero engineer. Two years later, they moved to the East Coast, settling in Woburn, Mass. After spending two years in England, they moved back to the U.S., whereupon they resided in Chelmsford and North Reading. In 1993, the couple purchased The Wood Farm, in Townsend, Mass., whereupon Mrs. Stanway set up a Bed and Breakfast, with the aid of her daughter-in-law, Monique. Through it all, she kept her love of dancing, and she and her husband were a common sight in various local nightclubs. After her husband’s death, she moved to Fitzwilliam, where she resided with her eldest son. The burial will be held privately at Riverside Cemetery, Dudley Road, West Townsend. Arrangements are under the direction of T.J Anderson & Son Funeral Home, 250 Main St, Townsend. She will be buried next to her husband under a joint headstone, inscribed with the song lyric, “Save The Last Dance For Me.”

The family of Violet "Vi" Stanway created this Life Tributes page to make it easy to share your memories.

Send flowers to the Stanway family.