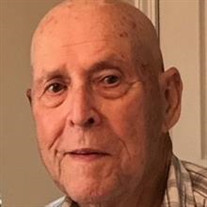 Shirley: Vincent J. Doiron, 90, of Shirley, died Saturday, September 29, 2018 at the River Terrace Health Care Facility in Lancaster. Mr. Doiron was born in Shirley, March 2, 1928, a son of John and Agatha M. (Doiron) Doiron and was a lifelong Shirley resident. During WW II Vincent served his country in the United States Navy. He worked many years for the Phoenix Beverage Company in Shirley and most recently for the federal government on Fort Devens. Vincent was an avid fisherman, hunter and trapper. He was a member of the Shirley Rod & Gun Club, National Rifle Association, Massachusetts Trappers Association and the Shirley Senior Citizens. He was also a communicant of St. Anthony’s Church in Shirley. He leaves a son, Stephen V. Doiron of Shirley; two daughters, Noella A. Langston of Fitchburg, Suzanne M. Cleland of San Jose, CA; 14 grandchildren, 19 great grandchildren and 1 great great grandchild. He was the husband of Blanche A.L. (Page) Doiron who died in 1980 and Stella A. (Trasky) Florio Doiron who died in 2010. He was also predeceased by a son, Richard D. Doiron of Fitchburg who died in May of 2012 and his daughter, Melanie Cassady of Kentucky who died last October. Vincent was the brother of the late Medard Doiron of Leominster, Victor Doiron and Gerald Doiron both of Shirley and Regina Jerome of Fitchburg. A funeral Mass will be celebrated 10:00 am Saturday, October 6, 2018 at St. Anthony’s Church, 14 Phoenix Street, Shirley. Burial will be in the parish cemetery. Calling hours are Friday, October 5, 2018 from 4:00-7:00 pm at the Anderson Funeral Home, 25 Fitchburg Rd. (Rte 2A) Ayer. Please see www.andersonfuneral.com to leave an e-condolence

The family of Vincent J. Doiron created this Life Tributes page to make it easy to share your memories.