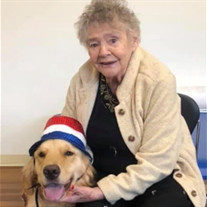 Ursula M. (Brenneis) Rosen, 84, longtime resident of Wheelwright, MA, passed away peacefully, surrounded by her loving family, at the RiverCourt Residences in Groton, on Saturday morning, November 13, 2021. Ursula was born in Germany on July 26, 1937, the daughter of the late Frederick and Elsa (Porth) Brenneis and came to this country in 1957 as the bride of Robert Rosen, a member of the United States Army stationed in Germany. The couple lived in Ft. Knox, KY and Worcester before settling in Wheelwright where they built a home in the woods and lived for over 50 years. Ursula was a talented silversmith and for over 30 years, owned and operated The Strawberry Patch (later known as The Rooster in the Strawberry Patch) in Barre, MA. Ursula enjoyed traveling and gardening, and in her younger years, skiing, kayaking and snorkeling. She leaves two daughters, Petra E. Robinson of Washington, DC and Inga K. Breault and her husband Robert of West Townsend; two grandchildren, Ashley Breault and Olivia Breault and a brother Peter Brenneis and his wife Lilo and their two sons, Oliver Brenneis and Simon Brenneis. She is predeceased by her husband, Robert W. Rosen who died in October, 1999. A memorial service will be held on a future date at the Cathedral in the Pines in Rindge, NH.

The family of Ursula M. Rosen created this Life Tributes page to make it easy to share your memories.

Send flowers to the Rosen family.