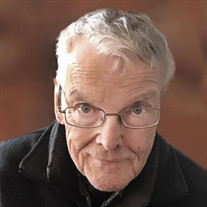 AYER: Timothy F. Holland, 75, formerly of Ayer, died Sunday, June 21, 2020 at his home. Tim was born in Boston, June 27, 1944, a son of Timothy F. and Marguerite (McGarity) Holland and resided in Ayer for over thirty years. He was a graduate of Christopher Columbus High School in the North End neighborhood of Boston. He continued his education at Boston College where, in 1965, he received his Bachelors Degree in English. From 1965-1970 he served his country in the United States Air Force including 13 months in Pakistan, attaining the rank of Captain. For twenty four years Tim owned and operated Markham-Priest Insurance Agency in Ayer, retiring in 2008. Following his retirement from the insurance business, Tim operated Tim’s Transport livery service from 2011 to 2019. He was a longtime member and past president of the Ayer-Shirley Lions Club and a member of the Honorable Order of the Blue Goose, the fraternal order of insurance-related professionals. He was a former member of the Nashoba Valley Chamber of Commerce and served as a past president of the Ayer Chamber of Commerce. In 2009 he was awarded The Outstanding Citizen Award by the Nashoba Valley Chamber of Commerce. For over 10 years he served as a member of the Board of Trustees to the Ayer Public Library. He was a longtime ticket holder and super fan of Boston College Hockey and was an avid movie buff who owned an impressive library of film noir titles. Tim leaves his wife of 54 years, Maria (Fanale) Holland; his son, Eric Holland and his wife, Mee Lian Choo of New York City; his daughter, Amy Harrington and her husband Joseph of Groton; his brother, Michael Holland of Winthrop and his wife Ann Marie; his sister, Sheila Jones of Medford; and two grandchildren, Jack Harrington and Charlie Harrington. Funeral services will be held by invitation only (due to Covid) on Monday, June 29, 2020 at the Anderson Funeral Home, 25 Fitchburg Road, (Rte. 2A) Ayer. For additional information or to leave an online condolence, please visit their website at www.andersonfuneral.com. In lieu of flowers please consider making a contribution to St. Jude Children's Research Hospital. www.stjude.org. Give hope to kids with cancer

AYER: Timothy F. Holland, 75, formerly of Ayer, died Sunday, June 21, 2020 at his home. Tim was born in Boston, June 27, 1944, a son of Timothy F. and Marguerite (McGarity) Holland and resided in Ayer for over thirty years. He was a graduate... View Obituary & Service Information

The family of Timothy F. Holland created this Life Tributes page to make it easy to share your memories.

Send flowers to the Holland family.