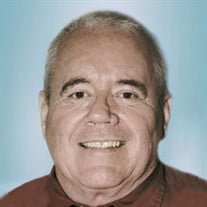 Townsend: Thomas G. Cotter, 72, of Townsend, died Tuesday, January 19, 2021 at University of Massachusetts – Memorial Hospital, Worcester after a brief illness. Tom was born in Nashua, NH December 29, 1948 the son of the late Frank and Fran (Cotton) Cotter of Pepperell where he grew up before moving to Townsend nearly fifty years ago. After graduating from North Middlesex Regional High School in Townsend in 1966, Tom entered the United States Navy where he served six years. For over four decades Tom worked in several capacities for Comcast before retiring in 2013 in an analyst position. Tom was a member of St. John’s Church in Townsend and was a founding member and Past Grand Knight of the St. John The Evangelist Knights of Columbus Council # 14842 as well as a past Faithful Navigator of the Knights of Columbus St. John Paul II Assembly # 3502. He was also a member of the Townsend VFW Post. Tom gave over ten years of service as an EMT to the Townsend Municipal Ambulance Service as well as being a member of Townsend Fire Department Company 3. He was a Civil War History aficionado. He also enjoyed gathering family ancestry history. Most of all, Tom enjoyed time with his family, especially the many trips to Disneyworld. Tom leaves his wife of fifty years, Cleta M. (Mohan) Cotter; his son and daughter in law, Christopher and Melody Cotter of Pepperell; two brothers, Frank Cotter of Marlboro, Mark Cotter of Pepperell; his granddaughter, Ashley Hills and her husband Daniel along with two great grandchildren, Savannah Hills and Cameron Hills. He was the brother of the late Kathy Winslow of Pepperell. Tom’s family will receive family and friends at calling hours on Sunday, January 24, 2021 from 2-5 PM at the Anderson Funeral Home, 250 Main Street (Rte 119) Townsend Center. Due to Covid – 19 restrictions Tom’s funeral Mass and burial will be held privately. Tom’s recorded funeral will be streamed Monday afternoon, January 25, 2021 from the funeral home website. Memorial contributions may be made to the K of C c/o St. John’s Church, 1 School Street, Townsend, MA 01469. A Livestream of Thomas' Funeral Mass and Graveside Service and will be available to view at the link below: https://my.gather.app/remember/thomas-g-cotter

The family of Thomas G. Cotter created this Life Tributes page to make it easy to share your memories.

Send flowers to the Cotter family.