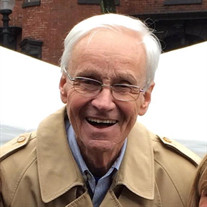 GROTON: Thomas C. Boyden, 80, of Groton, formerly of Brattleboro, VT, Boston’s South End and Watertown, died Sunday, July 19, 2020 at Health Alliance – Leominster Hospital following a lengthy struggle with Alzheimer’s Disease. Mr. Boyden was born in Boston, May 1, 1940, the son of George A. and Virginia (Brown) Boyden and was a 1958 graduate of Brattleboro High School. He served several years as a call firefighter to the Brattleboro Fire Department. For four years Mr. Boyden served his country in the United States Coast Guard District Personnel Office in Boston. For much of his career, Mr. Boyden worked in Employee Relations beginning at Jordan Marsh Company for fifteen years then continuing to Lechmere Inc. for twelve years and finally at BJ’s Wholesale before retiring in 1995. Over the years he remained very active in the communities where he resided. He was a former member of the Watertown JayCees, Past Chairman of the Boston Retail Group, Past President of the Watertown Multi-Service Center, Charter Member and Board Member of the Harbor to Bay Bike-a thon. In 2005 Mr. Boyden spearheaded a movement to successfully rehab the Childe Hassam Park on Columbus Avenue in his South End neighborhood of Boston. A proud Harley Davidson Motorcycle owner, Mr. Boyden rode over 100,000 miles throughout the continental United States and all the Canadian provinces. He leaves his wife of 52 years, Annemarie (Powers) Boyden; two daughters, Kimberly (Boyden) Casto of Shirley, Deborah Jean Boyden of Oakland, CA; four grandchildren, Cole Casto, Anthony L. Casto, Riley Weber and Conner Weber. He was the brother of the late Jane Kropp of Huntington Beach, CA. A celebration of Mr. Boyden’s life will be held at a day and time to be announced. Memorial contributions may be made to Harbor To The Bay https://www.harbortothebay.org/profile/tomboyden/ or Friends of Childe Hasson Park http://www.childehassampark.com/ The Anderson Funeral Home, 25 Fitchburg Road, Ayer is assisting the family with arrangements. For additional information or to leave and on line condolence, please visit their website at www.andersonfuneral.com.

The family of Thomas G. Boyden created this Life Tributes page to make it easy to share your memories.

Send flowers to the Boyden family.