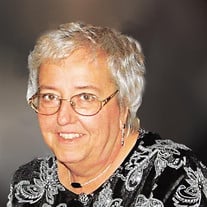 Ashburnham: Theresa M. Maguy, 69, of Ashburnham, formerly of Fitchburg, died Friday, November 9, 2018 at St. Vincent’s Hospital, Worcester following a brief illness. Theresa was born in Fitchburg, July 21, 1949, a daughter of Donald F. and Eva L. (Leclair) Maguy and resided in Fitchburg before moving Ashburnham twenty three years ago. She attended St. Joseph’s School and was a 1967 graduate of St. Bernard’s Central Catholic High School in Fitchburg. Following her graduation from high school Theresa went to work at New England Telephone and subsequently Verizon where she worked as an engineer until her retirement in 1994 after nearly 30 years of service. Following her retirement from Verizon, Theresa returned to work for another 20 years in a similar position at Engineering & Data Solutions in Gardner. She was a member of St. Joseph’s Church in Fitchburg. She enjoyed playing Bingo and spending time with her dog, PeeWee. Theresa leaves four brothers, Denis F. Maguy of Dighton, Robert E. Maguy and Ernest G. Maguy both of Fitchburg, Kenneth J. Maguy of Ashburnham; four sisters, Annette M. Rivard of Enfield, CT, Bernice M. Maguy of Fitchburg, Joyce M. Thibault of Lunenburg and Diane M. Maguy with whom she resided in Ashburnham. She also leaves many nieces and nephews. In December of 2002 she was predeceased by a brother, Francis D. Maguy of Fitchburg. A funeral Mass will be celebrated 10 AM Tuesday, November 13, 2018 at St. Joseph’s Church, 49 Woodland Street, Fitchburg. Burial will be in the parish cemetery. Calling hours are 4-7 Monday November 12th at the Isabelle & Anderson Funeral Home, 316 Clarendon Street, Fitchburg. Please see www.andersonfuneral.com for additional information or to leave an on line condolence. Memorial contributions may be made to MSPCA- Angell, 293 2nd Ave, Waltham, MA 02451.

The family of Theresa M. Maguy created this Life Tributes page to make it easy to share your memories.

Send flowers to the Maguy family.