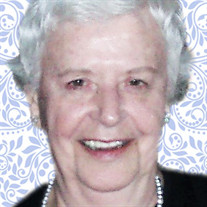 FITCHBURG-Theresa Margaret Caron, 90, formerly of New York City and Fitchburg, died Sunday, April 21, 2019, in the Notre Dame Long Term Care Center in Worcester. She was born in Fitchburg, on July 12, 1928, a daughter of the late, Arthur and Parmelia (Sylvestre) Caron. She was a graduate of Fitchburg High School and St. Vincent’s Hospital School of Nursing and began her nursing career at Burbank Hospital in Fitchburg. In 1952 she joined the U.S. Navy and served as a Nurse at the Naval Hospital in Bainbridge, MD. Following her honorable discharge from the service Terry moved to New York City where she would earn her master’s degree from Columbia University. She had a long career as a nurse in the City, retiring as a Nursing Administrator from New York Hospital. Terry was a devote Catholic and longtime member of St. John the Evangelist Church in New York City. She loved to travel and spent many falls in Spain. She also enjoyed knitting and playing bridge. She leaves her sister, Claire McNamara of Fitchburg; a brother, Maurice Caron and his wife Cynthia of Fitchburg; 16 nephews and nieces, 29 grandnephews and grandnieces and great-grandnephews and great-grandnieces. She is predeceased by two brothers, Roland Caron and Bertrand Caron; a sister, Lucille Spooner and a nephew David McNamara. Her funeral Mass will be celebrated on Thursday, April 25, 2019 at 1PM in St. Joseph’s Church, 49 Woodland St., Fitchburg. Burial will follow in the Parish Cemetery. A calling hour will be held on Thursday prior to the funeral from 11:30 AM to 12:30 PM in the Isabelle & Anderson Funeral Home, 316 Clarendon St., Fitchburg. In lieu of flowers memorial contributions should be designated to the Notre Dame Long Term Care Center Activities Program, 559 Plantation St., Worcester, MA 01605

FITCHBURG-Theresa Margaret Caron, 90, formerly of New York City and Fitchburg, died Sunday, April 21, 2019, in the Notre Dame Long Term Care Center in Worcester. She was born in Fitchburg, on July 12, 1928, a daughter of the late, Arthur and... View Obituary & Service Information

The family of Theresa Margaret Caron created this Life Tributes page to make it easy to share your memories.

Send flowers to the Caron family.