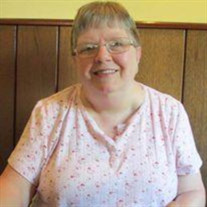 LITTLETON-Theresa (Guadagnoli) Bentley, 75, of Littleton, former longtime resident of Lancaster, died peacefully on Tuesday, December 14, 2021 in the Apple Valley Center in Ayer. She was born in Clinton on August 27, 1946, a daughter of the late George and Elizabeth (Cox) Guadagnoli. Terry worked at CVS in Clinton for several years where she was well known by the customers for her friendly demeanor. Several years ago prior to raising her family she worked as a hairdresser in Clinton. She enjoyed going up to Maine with her husband and family members. Terry also loved birds, and loved them so much that she was known as the “Birdlady.” She loved all her grandchildren very much and loved spending time with them, family was very important to her. Terry was such a giving person and always thought of others. She leaves her husband of 53 years, Lanny Bentley of Littleton; two daughters, Debra A. Giansanto and her husband Steven of Athol and Karrie A. Pellerin of Littleton; two sons, Lanny A. Bentley, Jr. of Colorado Springs, CO and Kenneth G. Bentley of Jackson, MI; a sister, Barbara Bickford of Westminster; eight grandchildren, Ashlee Giansanto, Justin Giansanto, Kayla Pellerin, Eric Pellerin, Brooklynn Bentley, Courtney Bentley, Destiny Lewis and Cora Sauer; a great-grandson, Revan Sauer and several nephews and nieces. She is predeceased by two brothers, George Guadagnoli, Jr. and Wesley Hickey and a daughter-in-law, Tara Bentley. A private graveside service will be held at a later date in the Massachusetts Veterans Memorial Cemetery in Winchendon. In lieu of flowers memorial contributions may be made to the Littleton Fire Department and EMS.

LITTLETON-Theresa (Guadagnoli) Bentley, 75, of Littleton, former longtime resident of Lancaster, died peacefully on Tuesday, December 14, 2021 in the Apple Valley Center in Ayer. She was born in Clinton on August 27, 1946, a daughter of the... View Obituary & Service Information

The family of Theresa (Guadagnoli) Bentley created this Life Tributes page to make it easy to share your memories.

Send flowers to the Bentley family.