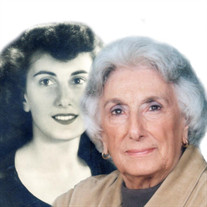 HARVARD: Teresa D. Johnson, 94, formerly of Harvard died Sunday, November 17, 2019 at University of Massachusetts - Memorial Hospital, Worcester. Teresa DeMattei Johnson was born on October 9, 1925, in Brooklyn, New York, a daughter of James and Virginia (Fusco) DeMattei. A graduate of Bay Ridge High School, she met her prince, Edwin Stanley Johnson, in 1946 while they were both working at Brooklyn Savings Bank. They were married in 1948 and bought their first house in Levittown, New York. In 1951, after having their first child, Stan was called back into the Army and his Army career took them from Alabama to Wisconsin to Germany to Virginia to North Dakota back to Virginia to France and, finally to Massachusetts. Upon Stan’s retirement from the Army in 1970, they moved to Harvard. A few years after Stan’s death in 1990, Teresa moved to Clinton where she remained until her death. After her original career as an officer’s wife, she worked as office manager and legal assistant in her son, Eric’s, law office for over 30 years, retiring in 2014 at age 89. She was very active with the church and was a parishioner at St. Theresa Church in Harvard since 1970. She was active in charitable and community work and was a volunteer at the Clinton Hospital Guild Thrift Store for many years. She leaves her daughter, Gayle J. Bowe, and her husband, Michael Bowe, of Shrewsbury; her son, Eric Stanley Johnson, and his wife (and her good buddy and loving caretaker), Sharon, of Bolton; her grand-daughter, Deirdre Fornari, and her husband, Andrew Fornari, of Shrewsbury; her grand-daughter, Kellie Doyle, and her husband, Brady Doyle, of Marlboro; and, her great grandchildren, Matthew Fornari and Zoey Fornari. She was the sister of the late Anthony DeMattei, of Newtown, Connecticut; the late James DeMattei, of Anderson, South Carolina; and the late Lucille DeMattei, of Leominster. A Funeral Mass will be celebrated 11 AM Friday, November 22, 2019 at St. Theresa the Little Flower Church, Still River Road, Harvard. Burial will be in the Bellevue cemetery. Mrs. Johnson's family will receive family and friends on Friday from 9:30 – 10:30 AM at the Anderson Funeral Home, 25 Fitchburg Rd., (Rte 2A) Ayer. Please see www.andersonfuneral.com for additional information or to leave an on-line condolence.

The family of Teresa DeMattei Johnson created this Life Tributes page to make it easy to share your memories.