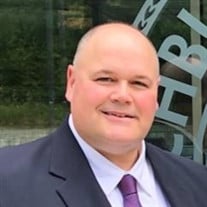 WESTMINSTER: Stanford G. Walter, Jr., 55, a thirty-year resident of Westminster, died unexpectedly Saturday, January 8, 2022 at Henry Heywood Memorial Hospital, Gardner. Stan was born in Leominster, November 13, 1966, the son of Stanford G. Walter, Sr., and the late Elizabeth (Dufresne) Walter and grew up in Fitchburg. He was a 1985 graduate of Fitchburg High School where he played football and then continued his education at Fitchburg State University where he majored in Industrial Technology and graduated in 1990. For eight years he served his country in the United States Army Reserves and the Massachusetts National Guard. For nearly forty years Stan worked for Market Basket Supermarkets in several communities including Leominster, Fitchburg, and most recently in Athol where he was the meat manager. He enjoyed his job because it gave him the opportunity to talk and get to know the customers. He was the type of man to go out of his way to help anyone. He enjoyed hunting, shooting, fishing with his son Cody, and watching the Boston Red Sox and the New England Patriots. There was nothing he cherished more than spending time with his family whom were his pride and joy. He was a true family man who loved working on his home. He was a fan of country music and enjoyed going to concerts as well as sporting events with his family. Attending NASCAR races with his brother and sons is something he treasured. He also enjoyed attending car shows and working on his classic 1969 Ford Mustang. He loved his dog Bindi who was his best friend that never left his side. He was a member of St. Edward’s Church in Westminster. In addition to his father of Orange, Stan leaves his wife of 30 years, Lisa A. (Provencial) Walter; two sons, Cody T. Walter and Chad M. Walter both of Westminster; his brother, Lorin Walter of Templeton; and two sisters, Wendy Provencial of Westminster and Brendy Walter of Gardner. A funeral Mass will be celebrated at 11 AM Monday, January 17, 2022 at St. Edward’s Church, 10 Church Street, Westminster. Burial will be held privately at a later date. Stan’s family welcomes family and friends to calling hours from 2-5 PM Sunday, January 16, 2022 at Isabelle & Anderson Funeral Home, 316 Clarendon Street, Fitchburg. For additional information or to leave an online condolence please visit their website at www.andersonfuneral.com.

The family of Stanford G Walter Jr. created this Life Tributes page to make it easy to share your memories.

Send flowers to the Walter family.