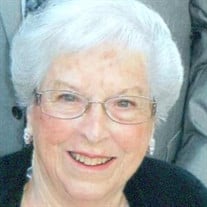 TOWNSEND- Sondra (Torrey) Gourdeau, 81, formerly of Townsend, died Friday evening, August 9, 2019, in the Oakdale Rehabilitation & Skilled Nursing Center in West Boylston. She was born in Bangor, ME on December 2, 1937 a daughter of the late Paul and Dorothy (Cox) Torrey. She was a graduate of New Britain Sr. High School and the University of Bridgeport’s Dental Hygienist program. Sondra had worked as a dental hygienist for 30 years for the late Dr. Francis Babineau in Leominster. Prior to her retirement in 2001, Sondra had worked as a sales representative for 11 years at Prudential Financial in Auburn. Following her retirement she and her husband moved to Georgia and had resided there for 10 years. While living in Townsend Sondra was a member of the Townsend Congregational Church and was very active in the North Middlesex High School Boosters Club. She had a passion for baking and crafting. She leaves her husband of 59 years, Robert J. Gourdeau of Leominster; a son, Robert P. Gourdeau and his wife Susan of Townville, SC; a daughter, Lee Cordaro and her husband John of Worcester; a brother, Richard A. Torrey of McCormick, SC; six grandchildren, Paul Gourdeau, Megan Stowe and her husband Justin, Robert Gourdeau, Alyssa Gourdeau; Kyle Cordaro and Matthew Cordaro and his wife Kaitlyn; 3 great-grandchildren, Hayden Gourdeau, Easton Stowe and Camden Cordaro and many nephews and nieces. She is predeceased by her sister, Gail Thompson, a nephew Mark Torrey and a niece Carrie Rickard. Her funeral service will be held on Tuesday, August 13, at 11 AM in the T.J. Anderson & Son Funeral Home, 250 Main St., Townsend. Burial will be in the Hillside Cemetery. Calling hours in the funeral home will be held on Monday, August 12, from 4 to 7 PM. In lieu of flowers memorial contributions may be made to Oakdale Rehabilitation & Skilled Nursing Center Activity Fund, 76 N Main St, West Boylston, MA

TOWNSEND- Sondra (Torrey) Gourdeau, 81, formerly of Townsend, died Friday evening, August 9, 2019, in the Oakdale Rehabilitation & Skilled Nursing Center in West Boylston. She was born in Bangor, ME on December 2, 1937 a daughter of the late... View Obituary & Service Information

The family of Sondra T. (Torrey) Gourdeau created this Life Tributes page to make it easy to share your memories.

Send flowers to the Gourdeau family.