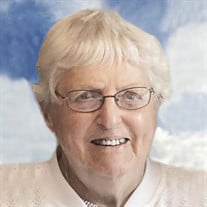 FITCHBURG: Simone V (Jacques) Berndt, 94, passed away peacefully on Sunday, April 26, 2020. She had been happily married for 63 years to Francis E. Berndt who passed away in November 2011. Simone was born on June 14, 1925 in Fitchburg where she lived the majority of her life. She was the daughter of Eugene and Claudia (Simard) Jacques. Simone was a member of St. Joseph’s Church in Fitchburg as well as its Ladies of St. Anne. She was a 1943 graduate of St. Bernard’s Central Catholic High School. All her life she was a competitive athlete. She belonged to a Women’s Candle Pin Bowling League and to the Westminster Country Club where she was the Women’s League Golf Champion in 1986 as well as twice scoring holes in one. Simone attended and loved to watch her grandchildren’s concerts, plays and sporting events. She also enjoyed her nightly card games with her friends at the Bella Vista Condominiums. At the age of 90, she moved to the Eisenberg Assisted Living Residence in Worcester to be closer to her family. She loved being Memere to her 5 grandchildren, 5 great-grandchildren and close family friends. Simone leaves her three children: her daughter Donna C. Theirrien, of Oxford; her sons Bishop Wayne F. Berndt OFM Cap. of Okinawa Japan, and Bruce E Berndt of Rutland; her five grandchildren: Michelle Ferrari and her husband Michael of East Hartland, CT; Brian Theirrien and his wife Rebecca of Newton, NH; Derek F Berndt of Chicago, IL; Melissa S. Berndt of Brighton; and Samantha M Berndt of Rutland; her five great-grandchildren: Soleigh, Corinne, Rafael, Evan, and Chloe and many nieces and nephews. She also leaves her brother in law, Robert Berndt of Tewksbury; and two sisters in law, Claire Jacques of Ashburnham and Claire Stockbridge of Plymouth Meeting, PA. Simone was predeceased by her son in law, Robert J. Theirrien of North Oxford; her daughter in law, Sharon (Marchand) Berndt of Rutland; her sisters and brothers: Loretta Cote, Stella Gage, Eugene Jacques, Gloria Jacques, Albert Jacques, and Theresa Lagasse; and her brother in law, Emil Berndt. The family is thankful for the love and care Simone received from the staff during the 4 plus years at the Eisenberg Assisted Living Residence especially from the staff on the Keepsake Unit. We would also like to thank the JHC Hospice team and the Jewish Healthcare Center staff who cared for her during her final days. Due to current restrictions, a memorial service and internment will be held at a later date. In lieu of flowers, a memorial donation may be made to “The Eisenberg Assisted Living Employee Fund”, Eisenberg Assisted Living Residence, 631 Salisbury St. Worcester, MA 01609. The Isabelle & Anderson Funeral Home, 316 Clarendon Street, Fitchburg is assisting the family with arrangements. For additional information or to leave an on line condolence, please visit their website at www.andersonfuneral.com.

FITCHBURG: Simone V (Jacques) Berndt, 94, passed away peacefully on Sunday, April 26, 2020. She had been happily married for 63 years to Francis E. Berndt who passed away in November 2011. Simone was born on June 14, 1925 in Fitchburg where... View Obituary & Service Information

The family of Simone V. (Jacques) Berndt created this Life Tributes page to make it easy to share your memories.

Send flowers to the Berndt family.