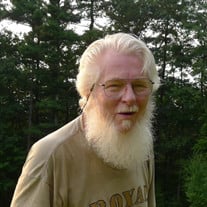 PEPPERELL: Sheldon C. Royal, 76, a longtime Pepperell resident passed away peacefully on Friday, August 27, 2021 at Fitchburg Healthcare, Fitchburg. Sheldon was born in Dover Foxcroft, Maine, August 10, 1945, a son of Clive and Beulah M. (Stitham) Royal. He leaves his wife, Natasha (Koryak) Carter; his stepson, Misha Koryak of Stoneham; a brother, Seward Schinck of Newport, NH; his sister, Lorraine Schinck of Brewer, ME; and two grandchildren. After graduating from high school, Sheldon entered military service where he served his country for 10 Years, including from 1966-1969 during the Vietnam War. Sheldon served as a Captain in the U.S. Army Special Forces stationed throughout Vietnam and Thailand. He personally trained and fought alongside Soldiers of the United States, The Republic of Vietnam, The Kingdom of Thailand, and the indigenous Vietnamese Montagnards. During the course of his 30 months in Vietnam, he sustained wounds in combat on no less than three occasions; he distinguished himself among his peers and was twice awarded the Bronze Star Medal, twice awarded the Army Commendation Medal and the Air Medal. Sheldon Royal’s military decorations include: Bronze Star Medal (1OLC) Purple Heart (2OLC) National Defense Service Medal Army Commendation (1OLC) Air Medal Parachutist Badge Combat Infantry Badge Vietnam Service Medal Vietnam Armed Forces Honor Medal Vietnam Cross of Gallantry with Palm Thailand Parachutist Badge Armed Forces Expeditionary Medal (Thailand) In 1973, Sheldon opened Hunter’s Rendezvous in Pepperell, a sporting goods store specializing in hunting and fishing, which he continued to operate until his death. This store was his life’s work which he pursued with passion and devotion without days off or vacations. Over the years Sheldon gathered a unique collection of high-quality firearms, archery, and fishing equipment that transformed his store into a veritable museum. True to its name, Hunter’s Rendezvous became a well-known gathering place for local veterans, hunters, and fishermen. The picturesque log cabin on Rt.119 became a distinctive landmark in Pepperell untouched by time for almost 50 years. Sheldon was a member of the Townsend Rod & Gun Club and the Purple Heart Recipients Association. He enjoyed hunting and fishing and preferred a life lived under the direct laws of nature to one lived under the complex codes of men. Funeral services will be held privately. The Anderson Funeral Home, 250 Main Street, Townsend Center is assisting the family with arrangements.

The family of Sheldon C. Royal created this Life Tributes page to make it easy to share your memories.

Send flowers to the Royal family.