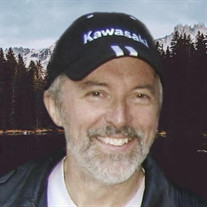 MILFORD, NH: Scott R. Nickerson, 64, of Milford, NH, formerly of Ashby, MA, died Wednesday, January 13, 2021 at Massachusetts General Hospital, Boston after a lengthy illness. Scott was born in Fitchburg, March 4, 1956, a son of Donald F. and Yvonne D. (Comeau) Nickerson and has resided in Milford for over 20 years. He grew up in Ashby and was a 1974 graduate of Montachusett Regional Technical High School in Fitchburg where he played ice hockey and football. He went on to work as a supervisor at Hollis Engineering in Nashua, NH, a Documentation Specialist at both Cirtronics Corporation in Milford, NH and at Colonial Electronics Manufacturing in Nashua, NH. In addition to his parents of Fitchburg, Scott leaves his wife of 19 years, Sharron A. (Jones) Nickerson; four daughters, Corine Farnsworth and Jodie Nickerson both of Ashby, Kimberly Leano and her husband Thomas of Phillipston, Jill Nickerson of Fitchburg; a stepson, Jeff Lyons of Milford, NH; his stepdaughter, Tiffany Haddad and her husband Danny of Hoboken, NJ; eleven grandchildren, Gwendolyn & Evin, Chloe, Isabelle, Jackson, & Dexter, Samantha & Elizabeth, Julianna, Teddy & Eli; his ex-wife Bethany (Roberts) Molter of Ashby; two brothers, Craig F. Nickerson and his wife Yvonne of Gardner, John S. Nickerson and his wife Noel of Leominster; a brother-in-law Abbie Solarez of Brawley, California; sister-in-law Deb Houghtaling of Stamford, Vermont and several cousins, nieces, nephews, & friends. Scott was the brother of the late Brenda (Nickerson) Solarez and the brother-in-law of the late Brenda (Forcino) Nickerson. There are no words to describe the incredible strength and faith Scott carried with him throughout his life. He never stopped dancing and laughing. Scott also enjoyed roller blading, tennis, raquetball, motorcycle rides, skiing, and traveling. He had an incredible sense of humor and people loved being around him. His strength and bravery showed the world he had a fight in him like no other. Scott adored his family and friends and would be proud of the legacy he’s leaving behind. Nothing compares to the devotion that he and his wife, Sharron shared together. They truly created a beautiful and adventurous life together, full of everlasting hope and memories. In keeping with his loving and caring spirit, donations can be made in honor of Scott’s daughter, Jodie Nickerson to Best Buddies, 2 Seaport Lane, Suite 300, Boston Ma 02210-2028. Due to COVID restrictions, funeral arrangements will be held privately. A celebration of life will be scheduled at a later date. The Anderson Funeral Home, 250 Main Street, Townsend Center is assisting the family with arrangements. For additional information or to leave an online condolence please visit their website at www.andersonfuneral.com.

The family of Scott R. Nickerson created this Life Tributes page to make it easy to share your memories.

Send flowers to the Nickerson family.