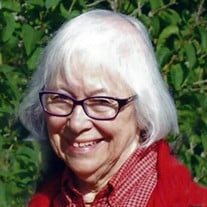 SHIRLEY- Sally W. (White) Reed, 90, formerly of Shirley, died peacefully Thursday evening, February 14, 2019, in the Life Care Center of Nashoba Valley in Littleton. Sally was born in East Aurora, NY, on March 13, 1928, second youngest of four daughters born to the late Grover and Evelyn (Arndt) White. She is a graduate of Stephens College, in Colombia, MO, and studied organ and harpsichord with John Fesperman at the New England Conservatory of Music and Boston University. A resident of Cambridge from 1955-1979, she taught privately there for most of the 1960's and 1970's. After moving to England for 3 years, 1979-1982, so Don could complete a project for Digital Equipment Corporation, she and her beloved husband of 37 years,, architect and artist, Don Reed, moved to Shirley Center Historic District where they became immersed in the community. Sally and Don especially enjoyed family and being patrons of the Arts. She is a former accompanist of the Cambridge Chorale, organist at Swedenborg Chapels in Cambridge and Newton in the 1960's and 1970's and also served as organist for 10 years at First Parish Universalist Meetinghouse in Concord. She was a soloist with the Concord Church's Festival Orchestra. She has performed in numerous baroque chamber music concerts at Old North Church, MIT Chapel, and most recently at The Meetinghouse on the Common in Shirley Center, MA. She was on the faculty of Indian Hill Music Center in Littleton, MA, as a teacher of piano and harpsichord for students in the surrounding area, including formally, Groton School and Lawrence Academy. She performed with Nashoba Chorale and for Indian Hill faculty concerts, and retired in May 2017 at age 89. She was a member of the New England Piano Teachers Association. She is survived by her children, son Gustav Konitzky and wife Peggy of Topsham, ME; daughter, Sigrid Pickering of Dummerston, VT; son David Reed of Belchertown, MA; daughter, Martha Baker and husband Jeffrey of Fuera Bush, NY; brother Malcolm White of Ashford, CT; nine grandchildren, Sasha (Konitzky) Shortbridge and husband David of Mableton GA, Brie (Konitzky) McCarthy and husband Ryan of Round Pond, ME, Gretchen Konitzky of New Harbor, ME, Catherine Pickering of Boston & Dummerston, VT, Susan Pickering of Lummi Island, WA, Sarah Reed and husband Simon Cook of London England, Jason Reed and wife Teri of Somervile, Emma Baker of Somerville, and Sam Baker of Marysville OH; two great-grandchildren, Fiona McCarthy and Ethan Reed and over 20 nephews and nieces in the White, Reed, Kitson, Suter, Morrissey, Tillapaugh and Rubenstein families. She is predeceased by her former husbands, Richard Lynch, Gustav Konitzky and her most beloved husband of 37 years, Donald Reed, as well as her three sisters, Jean Kitson, Winifred Morrissey and Nancy Tillapaugh. A celebration of Sally’s life will be held in the Shirley Meeting House, 41 Brown Rd., Shirley, 1 PM Saturday, May 11, 2019. In lieu of flowers memorial contributions may be made to Compassionate Care Hospice in Woburn, MA.

The family of Sally W. (White) Reed created this Life Tributes page to make it easy to share your memories.

Send flowers to the Reed family.