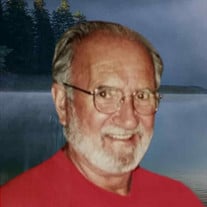 Roger J. Leger Loving & devoted husband, father, Pepere, son, and friend Roger J. Leger, 83, passed away peacefully in his home on Sunday, February 7, 2021 in the presence of those who loved him endlessly. Roger was born in his home, the youngest of six kids, to Denis and Arzelie (Boudreau) Leger, on August 31, 1937. He had many stories of his life as the youngest, and was always so very proud of his siblings. He lived in Fitchburg his entire life. On September 27th, 1958, he proudly married the love of his life, Freda T. Fournier. They found their dream home and started their life together. After thirteen years of waiting, their only child, Nicole, was born, and a whole new journey began. Roger worked at James River/Custom Paper until his retirement in 1997. He often times worked double shifts, nearing a hundred hours a week. It was important to him that Freda be home, raising Nicole. Roger was proud to serve in the National Guard, and had many crazy stories of his weekends away while training. He also was a member of the Knights of Columbus Post #99 (3rd Degree), and a member of the American Legion, Post #429, both of Fitchburg. Roger was a dedicated servant to the parish he was born into, St. Joseph’s in Fitchburg. Starting as an altar boy, he served his God in many ways, all of equal and utmost importance to him. He was a lector alongside his daughter for many years, worked at many summer bazaars, and helped Freda run every Sunday night Bingo for many, many years. He served as President of the Parish Council, and enjoyed being an Acolyte until his health prevented him from doing so. Many can recall the sound of his jingling keys as he did the collections every Sunday morning. He is predeceased by his loving wife of 52 years, Freda T. (Fournier) Leger, who passed away on November 29th, 2010. His five siblings and their spouses also went before him: Melace and Helen; Robert (Bob) and Irene; Norman and Yvette; Louis (Louie) and Pam; and his only sister, Edna Arsenault, and her husband, “Mr. Cam”. He is survived by his only daughter, Nicole A. Ghilardi, and her partner, Joe Gendron, both of Fitchburg; his caring and only Grandson, Lucas P. Ghilardi, of Northampton; his adoring and only Granddaughter, Macy N. Ghilardi of Leominster. He leaves his nieces and nephews: Paul and Pauline Arsenault, Gail Richard and Joyce Reed, Sandra Cote, and Pete and Ricky Leger. Roger was a committed, loyal, strong, proud man. He worked so hard to provide a loving and stable home for his family. Although his work kept him away many hours during the week, the hours that he was home can only be described as the best. His impatience and stubbornness served him well in 1996; the surgeon said he couldn’t be saved, but Roger had his own plans. In 1999, he became “Pepere” - the proudest accomplishment of his life by far. He relished every moment with his grand-babies; afternoon naps were always taken on Pepere’s lap. He was at every game, every ceremony, every celebration - his love and pride were so immensely deep. Pepere and his buddy Luke spent many mornings out to breakfast, and many evenings at home watching the Bruins and Red Sox. Pepere and his Macy Girl loved to take their walks together, and even at age 19, she still loved to climb into his lap to share stories and just enjoy the moments they were able to spend so close together. Lucas and Macy shared so many inside jokes with Pepere that they will laugh about often for years and years to come. Being able to live with Pepere during the final chapter of his life was an honor they will always cherish. Roger’s services will be private, and held at a later date at the convenience of the family. If you would like to remember Roger, donations in his memory may be made to the Paula Goodchild Gastonguay Memorial Award. Please include Roger’s name in the memo line and make checks payable to: Alumni Association of FHS, Inc. P.O. Box 906, Fitchburg, MA 01420 He will be forever loved and missed, until we meet again. The Isabelle & Anderson Funeral Home, 316 Clarendon Street, Fitchburg is assisting the family with arrangements.

Roger J. Leger Loving & devoted husband, father, Pepere, son, and friend Roger J. Leger, 83, passed away peacefully in his home on Sunday, February 7, 2021 in the presence of those who loved him endlessly. Roger was born in his home, the youngest... View Obituary & Service Information

The family of Roger J. Leger created this Life Tributes page to make it easy to share your memories.

Send flowers to the Leger family.