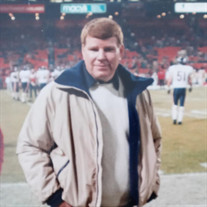 AYER: Roderick M. Brooks, 78, a former resident of Ayer, Reno, Nevada, Seattle, Washington, Cape Cod and Sarasota, Florida died December 6, 2021 in Sarasota, Florida. Rod was born September 30, 1944 one of three children born to Roderick M. and Margaret J. (Sughrue) Brooks and grew up in Shirley & Ayer. He was a 1962 graduate of Ayer High School where, for four years, played baseball, basketball and football where was a co-captain. He also served as the Class President in his Junior & Senior years. Upon his graduation from high school, Rod received a full athletic scholarship from the University of Massachusetts – Amherst where he played football and served as the team captain in his junior and senior years. Following his graduation from college, Rod was awarded a try-out with Detroit Lions but, due to back injuries, was unable play football for them. Ultimately Rod did play for the Lowell Giants, a farm team for the then Boston Patriots. After leaving the Boston Patriots farm team, Rod signed on with the US Football League as a linebacker. Rod’s career brought him to Seattle, Washington where he developed a successful business serving the concrete industry. Rod along with business partner, Joe Tanner, purchased U-Cart Concrete Systems in early 1980s. He and Joe were on the cover of Entrepreneur Magazine - two men in their 30s who turned a small manufacturing business into a successful nationwide manufacturing and franchise company. After selling U-Cart, he started Nevada Estates, in Reno; a high end real estate property investment firm. Eventually, when he moved to Florida, he followed his passion for the ocean, cruising the coastal waterways as well as ports all the way to The Cape. He loved sailing, diving coral reefs and the outdoors in general. Rod's friends would all agree that Rod was the man they would want as their leader in battle. He was a man of high standards and strong convictions. Rod leaves his sister, Janet M. Caisse of Leominster' his former wife, Sherry "Sam" Brooks King of Almira, Washington. He was a wonderful role model to his stepdaughter, Suzan Jones of Idaho Falls) and his step-grandson, Alexander. In addition to his parents, he was predeceased by his younger brother, John Brooks in 1968. Rod’s remains will be laid to rest with his parents and his brother at St. Mary’s Cemetery, Bishop Road, Ayer at 4PM Thursday June 2, 2022 . The Anderson Funeral Home, 25 Fitchburg Road, Ayer is assisting the family with arrangements.

The family of Roderick M. Brooks created this Life Tributes page to make it easy to share your memories.