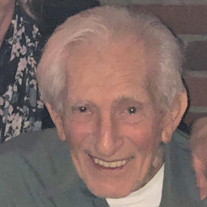 Rocco “Rocky” Antone Reola, formerly of Claremont, NH, died April 22, 2021 at the age of 92, at Care One Rehabilitation Center in Newton, Massachusetts. He was born in New Britain, CT, on January 3, 1929, a son of the late Joseph and Margaret (Yelenak) Reola. Rocky served in the U.S. Army from age 18-22, and was later hired at United Technologies Corporation in Hartford, Connecticut, eventually transitioning to shift supervisor. In his retirement years he loved to find treasures at flea markets and yard sales which he would shine up and repair for resale. He enjoyed a good conversation, the laughter of family and friends, and an occasional lottery ticket. Despite various difficulties that came his way, Rocky was often the one to bring others joy in their times of trouble, rather than worrying about himself. Rocky is survived by his loving wife, Gail Eagles Reola whom he married November 20, 2020, and step-daughter, Donna Joki whom he lived with in Brookline, NH. He also leaves two step-sons, Douglas Eagles and Nelson Fontaine, and a step-daughter Jeanne Meehan, along with several step-grandchildren and -great grandchildren. He is predeceased by his first wife Roseline (Root) Reola, of Claremont, NH who died in 2013. A graveside service will be held privately in the Ascutneyville Cemetery in Ascutney, VT at the convenience of the family. There are no calling hours. The T.J. Anderson & Son Funeral Home, 250 Main St., Townsend, MA is assisting the family with the funeral arrangements. For further information or to leave an online condolence please visit their website at www.andersonfuneral.com.

The family of Rocco A. Reola created this Life Tributes page to make it easy to share your memories.

Send flowers to the Reola family.