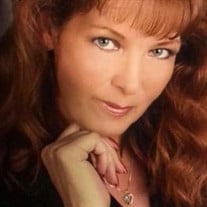 SHIRLEY-Robin G. (Johnston) McInerney, 67, of Shirley formerly of Westminster, passed away peacefully on Christmas night in her daughter’s home, surrounded by her loving family. She was born in Woburn, on July 11, 1954, the daughter of the late William H. and Frances L. (Proctor) Johnston and has resided in Shirley for the past two years. Prior to that she was a longtime resident of Westminster, MA and North Lauderdale, FL Robin was a Hospice C.N.A. at the Veteran’s Homestead in Fitchburg for several years prior to her retirement. She enjoyed painting and spending time in nature. She always had a way of seeing the beauty in everything around her and would gently guide others to see the same. She would always say that family is everything and valued the close bonds she had with them dearly. She was devoted to caring for those who needed comfort and found her true calling as a hospice nurse for veterans, many of whom called her their Angel. She was truly a light in this world like no other and her love and compassion has touched many hearts. She will be dearly missed. Her loving husband, Michael G. McInerney passed away in 2002. She leaves two daughters, Crystal V. Collada and her husband Richard of West Townsend and JoAnn L. McInerney of Ashburnham; her granddaughter, Catalina I. Collada of West Townsend; four brothers, Kevin Johnston and his wife Denise of Lowell, Gary Johnston and his wife Kay of Wakefield, Raymond Johnston and his wife Lauren of Newburyport and Steven Johnston of Wakefield and several nephews, nieces, and cousins. In addition to her husband she is predeceased by her brother, Thomas Johnston and her sister, Darlene Ramey, and her niece Kaitlyn Ramey. Calling hours will be held on Sunday, January 2, 2022, from 2 to 4:30PM in the T.J. Anderson and Son Funeral Home, 250 Main St., Townsend followed by a prayer service at 4:30PM.

SHIRLEY-Robin G. (Johnston) McInerney, 67, of Shirley formerly of Westminster, passed away peacefully on Christmas night in her daughter&#8217;s home, surrounded by her loving family. She was born in Woburn, on July 11, 1954, the daughter... View Obituary & Service Information

The family of Robin G. (Johnston) McInerney created this Life Tributes page to make it easy to share your memories.

Send flowers to the McInerney family.