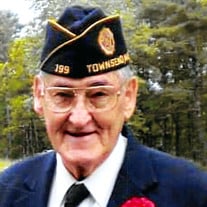 Townsend: Robert F. Tumber, 92, a lifelong resident of Townsend died Sunday, March 10, 2019 at the Lahey Hospital in Burlington, from complications of pneumonia. He was married for 60 years to Barbara A. (Scurrah) Tumber, who passed away in March of 2010. Mr. Tumber was born June 1, 1926, a son of Edward W. and Myrtle (Hobart) Tumber and was a 1944 graduate of Townsend High School. He continued his education at Northeastern University where he received a Bachelors Degree in Business. During WWII he served his country in the United States Navy and was a charter member of the Townsend’s American Legion and VFW Posts in which he was very active, especially on Memorial Days. For nearly 50 years, Mr. Tumber owned and operated the West Side Package Store in West Townsend. A place where many Towns’ people met to not only purchase product but to hear Bob’s daily opinions. Known to many as the “Mayor” of Townsend, Bob was always willing to give of himself to his community. Bob was always known to have an opinion in Townsend politics, he served as a Town Constable, member of the Town Cemetery Commission, the Town’s Finance Committee, member of the Townsend Volunteer Fire Department, over saw the Reading Room in West Townsend, plus being active member with the Senior Citizens. In his retirement he remained very active in the North Middlesex Regional High School Athletic Booster Club and for years was seen taking tickets at the gate of football games and basketball games. He participated in many town functions from behind the scenes. He received many awards from different Town’s organizations. In 2005 he was recognized as an Outstanding Member of the Community by the William E. May Endowment Committee. Bob was a devoted & loving family man. He enjoyed the simple pleasures in life. His favorite past times were BBQs with the family, watching the Celtics game as well as Wheel of Fortune and Jeopardy. Bingo at the Townsend Senior Center. He loved spending time with his Grandchildren. He taught them how to drive in his 1964 Ford Falcon and how to fly a kite at the beach. He loved being at the ocean with his family. His laughter filled the room as his smile was a ray of sunshine. He leaves two daughters, Ruth F. Coole and her husband Robert of Windham, NH, Nancy A. Finch of Lowell; three Grandchildren, Kathryn (Coole) McClellan and her Husband Patrick, Robert Coole, and Ryan Finch. He was predeceased by his brother, Edward W. Tumber Jr, his nephews James Tumber and Gerald Tumber, and his granddaughter Jacqueline Marie Finch. In keeping with Bob’s wishes, funeral services will be held privately. There are no calling hours. In lieu of flowers the family requests memorial donations be made to a charity of ones choosing. The Anderson Funeral Home, 250 Main Street, Townsend Center is assisting the family with arrangements.

Townsend: Robert F. Tumber, 92, a lifelong resident of Townsend died Sunday, March 10, 2019 at the Lahey Hospital in Burlington, from complications of pneumonia. He was married for 60 years to Barbara A. (Scurrah) Tumber, who passed away in... View Obituary & Service Information

The family of Robert F. Tumber created this Life Tributes page to make it easy to share your memories.

Send flowers to the Tumber family.