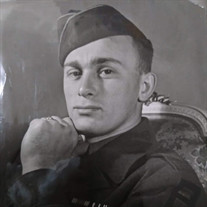 FITCHBURG- Robert A. Fortier, 98, of Lantana, FL formerly of Fitchburg, died Sunday, August 29, 2021, in the Trustbridge Hospice House in West Palm Beach, FL. He was born in Fitchburg, on July 8, 1923, a son of the late Alfred and Marie Jeanne (Chardonne) Fortier and had resided in Fitchburg for several years before moving to Boynton Beach, Fl and more recently Lantana, FL. Robert was a WWII veteran having served as a Sergeant in the U.S. Army with the 296th Engineers where he participated in the Battle of the Bulge. He frequented the 296th reunions into his 90’s. He was a former member of St. Joseph’s Parish in Fitchburg and the St. Joseph’s Club where he loved to play chess and pool. Robert was a rated Chess player and until recently still played against opponents on the computer. He was a remarkable man of integrity and conviction and shared many beautiful occasions together with family and friends. Robert was a salesman for the Charles Manoog Plumbing and Heating Sales Company for several years prior to his retirement in 1985. He also owned the Fortier Tie Company where he held two pattens for neckties. His wife, Delores (Fontaine) Fortier, died in 1985. He leaves a daughter, Joanne Nutting of Gardner; a brother, Raymond Fortier and his wife Rose of Leominster; three grandchildren, Carrie Ciaccio and her husband David of Gardner, Ashley Nutting-Poirier and her husband Andrew of Westminster and Michael Lacroix of Punta Gorda, FL; four great-grandchildren, Hope Parisi, Jordan Parisi and Madison Parisi all of Gardner and Myles Poirier of Westminster, several nephews and nieces and his companion of 28 years, Valleri Brauer. In addition to his wife, he is predeceased by three brothers, Paul Fortier, George Fortier, Joseph Fortier and two sisters, Jeanne Pelletier and Yvette Marble. A graveside service will be held with full military honors in St. Joseph’s Cemetery in Fitchburg on Monday, October 25, 2021 at 2:00 PM. There are no calling hours. The Isabelle and Anderson Funeral Home, 316 Clarendon St., Fitchburg is assisting the family with the funeral arrangements.

FITCHBURG- Robert A. Fortier, 98, of Lantana, FL formerly of Fitchburg, died Sunday, August 29, 2021, in the Trustbridge Hospice House in West Palm Beach, FL. He was born in Fitchburg, on July 8, 1923, a son of the late Alfred and Marie Jeanne... View Obituary & Service Information

The family of Robert A. Fortier created this Life Tributes page to make it easy to share your memories.

Send flowers to the Fortier family.