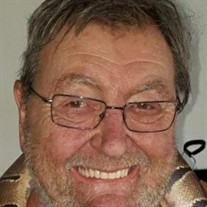 SHIRLEY; Robert E. “Bubba” Wheeler Jr., 67, of Shirley died unexpectedly Monday, January 13, 2020 at his home. Bubba was born in Groton, MA, September 9, 1952, a son of the late Robert E. "Pere" Wheeler Sr. (Deceased) and Mary Jane "Gram" (Chevrette) Wheeler (Deceased). He resided all of his life in Shirley close to his family. In addition to his parents, Bubba was predeceased by his oldest son Robert E. "Robbie" Wheeler III who died unexpectedly just over two years ago. He leaves his son, Peter D. Wheeler of Lunenburg; his brother, Gerard Wheeler and his wife, Doris of Shirley; four sisters and brothers in law: Rosemary and Lee Farrar, Mary Jane and Paul Farrar, Ellen and John Cauley all of Shirley, and Annette and Eric Munnis of Greenville, NH, as well as many nieces and nephews. Bubba also leaves behind his Son Robbie's pet snake, "Blingy," which he inherited upon Robbie's passing. Blingy was a cherished piece of his lost son, which Bubba clung to. It also helped him get a rise out of people (See below). Bubba had a love of life and was known for his jovial laughter. Laughter, which at times unfortunately stemmed from off-color humor or some form of inappropriateness. That didn't always matter though. He possessed a charm that allowed him to get away with it and you often found yourself disapproving of his joke or comment, but still chuckling anyway. He enjoyed getting a rise out of people. A trait he inherited from his father and he was proud to carry on that tradition among others. Bubba also followed the family tradition of providing service to the Town of Shirley. In the 1970's, Bubba worked a number of years for the Shirley Highway Department side by side with other family members. In November of 1970, Bubba followed the biggest Wheeler family tradition, as well as his Father's footsteps, and joined the Shirley Fire Department and it's connected association, Shirley Hose Co. # 1. He remained an active On-Call Firefighter and Company Member for 23 years before transitioning to an Honorary Member of Shirley Hose Co. # 1 due to availability based on his full-time employment obligations. In 1980, Bubba left the Highway Department and went to work for R.E. Chapman Company in West Boylston, MA. Bubba was a skilled welder and machine operator. He spent his 30 year career being a driller and doing all the hard, back-breaking, dirty jobs associated with it. Throughout the Northeast Bubba drilled many holes in the earth for either future elevators or future water wells. During his 30 year career he was a proud card carrying member of the International Union of Operating Engineers, Local 4, and a member of the International Union of Elevator Constructors, Local 4. Keeping with family traditions, Bubba had a passion for, "junk." Again, he inherited this from his Father, who just happened to be his best friend. Together they spent hours upon hours together, either in the back yard or garage and cellar, stripping plastic sheathing off of copper wire or breaking whatever metallic object they could get their hands on, down to its base precious metals components. They would in-turn sell the product of their hard work, only if the price was right of course, and revel in telling anyone who would listen about the score they made and they adventures they had along the way. Their stories were never in short supply. This was mostly due to having a lot them and because they would often repeat them. Ya know, often. The supply was endless. Upon his retirement and before his Father passed away, they were able to work full-time side by side with each other. Not that the hours they had put in over the years weren't close to that, but now there were no other commitments. Just them, together, working on junk. Regaling tales of adventures past to whomever would stop by. Those were the times. The times with Pere, working on junk in the back yard together. Having a beer and enjoying life. Those times. Those times were when Bubba was at his happiest and there were plenty of those times. Funeral services will be held 11:00 AM, Friday, January 24, 2020, at the Anderson Funeral Home, 25 Fitchburg Road (Rte 2A) Ayer, MA. Bubba’s family will receive family and friends at the funeral home at 10:00 AM, for calling hours until the time of the service. Burial will immediately follow at St. Anthony’s Cemetery, Shirley, MA. In lieu of flowers or donations the family simply asks, have fun once in awhile and, "Relax." "Relax," was one of Bubba's favorite things to say to people. Lastly, don't always judge a book by it's cover, sometimes the dirt stained crude ones have the biggest hearts. For additional information or to leave an on line condolence, please visit their website at www.andersonfuneral.com.

The family of Robert E. "Bubba" Wheeler Jr created this Life Tributes page to make it easy to share your memories.

Send flowers to the Wheeler family.