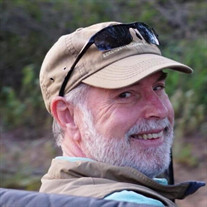 On Thursday morning, December 17, 2020, Robert G. Carter, of Devens, MA lost an eight month battle against the cruelty of cancer. Despite his best efforts, outstanding medical treatment, and his positive attitude, in the end, he died at home as he wished, in the care of his loving wife, Cynthia Kaul Carter and Nashoba Nursing and Hospice staff. Robert was born December 2, 1947. He is predeceased by his parents Evelyn B. Carter and Donald W. Carter, Jr. He is survived by his wife of 27 years, Cynthia, his brother Donald W. Carter, III (Gwendolyn), his sister Elizabeth A. Sheldon (Charles), his nephews Donald (partner Amy) and David (Rebecca) Carter and their four children, and nieces Elizabeth (Christoper), Hilary (partner Drew), Emma (Daniel), and Danielle LeBlanc and a new grand nephew. Bob, (known by many schoolmates as “Bobby C. from Gage St.”), was a Fitchburg native through and through even after moving away almost 29 years ago. Every Thanksgiving he cheered his hometown Red Raiders football team against longstanding rival Leominster. He graduated from Fitchburg High School in 1966 and Mt. Wachusett Community College in 1968. He worked most of his adult life as a machinist, 25+ years at American Tool and Machine and then six years until retirement in 2011 at Merit Machine Manufacturing, also in Fitchburg. (The latter being the best employer ever in his career). Bob had a beloved twinkle in his eye and an easy grin. He loved life and people, old friends and new, from near and afar. In retirement, he and Cindy had the good fortune to travel all over the world. He was, among many things, an avid gardener, Boston sports fan, hiker, skier, tennis player, fisherman, lover of new adventures, and more. He was always willing to lend a helping hand or offer moral support to friends and strangers alike. It seems fitting that he died in the midst of a beautiful snowstorm, the powdery kind of snow he loved to ski in. The following quote by Ralph Waldo Emerson fits Bob’s style of life: "To laugh often and much; to win the respect of intelligent people and the affection of children; to earn the appreciation of honest critics and to endure the betrayal of false friends. To appreciate beauty; to find the best in others; to leave the world a bit better whether by a healthy child, a garden patch, or a redeemed social condition; to know that even one life has breathed easier because you have lived. This is to have succeeded." -Ralph Waldo Emerson Anderson Family Funeral Homes, Ayer, has made arrangements. A memorial service is tentatively planned for the spring when his ashes will be interred at Mt. Auburn Cemetery in Cambridge, MA. In lieu of flowers, donations can be made in his memory to Loaves and Fishes Food Pantry, PO Box 1, Ayer, MA 01432 or The Gardeners Exchange, PO Box 328, Shirley, MA 01464.

On Thursday morning, December 17, 2020, Robert G. Carter, of Devens, MA lost an eight month battle against the cruelty of cancer. Despite his best efforts, outstanding medical treatment, and his positive attitude, in the end, he died at home... View Obituary & Service Information

The family of Robert G. Carter created this Life Tributes page to make it easy to share your memories.

Send flowers to the Carter family.