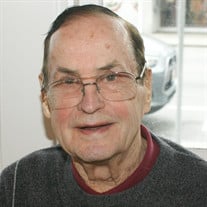 TEWKSBURY: Robert A. Berndt, 88, of Tewksbury, formerly of Fitchburg and Lunenburg, died Wednesday, November 4, 2020 at High Pointe House, Haverhill after a brief illness. Mr. Berndt was born in Fitchburg, January 31, 1932, a son of Emil and Alice (Boucher) Berndt and was a 1949 graduate of Fitchburg High School. He later continued his education at Saunders Radio & Television School, Fitchburg State College and Northeastern University. He had been a member of St. Joseph’s Church as well as its Drum & Bugle Corps. During the Korean Conflict Mr. Berndt served his country in the United States Army. For over thirty years, Mr. Berndt worked at Raytheon Corporation retiring in 1996 as a Senior Electronic Design Engineer. During his career, Mr. Berndt worked on the Patriot Missile System and travelled to Japan, Germany and White Sands Missile Range, White Sands, New Mexico. He enjoyed playing golf and had participated in the Raytheon Golf League as well as playing frequently at Green Meadow Golf Course in Hudson, NH. He was also very enthusiastic sailor out of Marblehead as well as a fabulous skier throughout New England, especially at Wildcat Mountain in New Hampshire. He also enjoyed building model airplanes and had been a member of the 495 Model Airplane Flying Club. He was predeceased by his two brothers, Francis Berndt and his wife Sim of Fitchburg and Emile Berndt and his wife, Norma, also of Fitchburg. He also leaves his former wife, Betty Ann Berndt-Brown of Dennis, his sister, Claire Stockbridge of Pennsylvania, and many nieces and nephews across the world. A private interment will be held at St. Joseph’s Cemetery in Fitchburg. Interment at St. Joseph’s Cemetery, Fitchburg will be held privately. The Isabelle & Anderson Funeral Home, 316 Clarendon Street, Fitchburg is assisting the family with arrangements.

TEWKSBURY: Robert A. Berndt, 88, of Tewksbury, formerly of Fitchburg and Lunenburg, died Wednesday, November 4, 2020 at High Pointe House, Haverhill after a brief illness. Mr. Berndt was born in Fitchburg, January 31, 1932, a son of Emil and... View Obituary & Service Information

The family of Robert A. Berndt created this Life Tributes page to make it easy to share your memories.

TEWKSBURY: Robert A. Berndt, 88, of Tewksbury, formerly of Fitchburg...

Send flowers to the Berndt family.