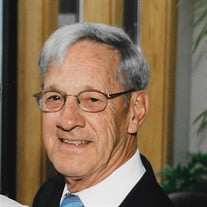 Richard L. Larochelle, 89, passed away at home on September 18, 2018. Richard was born in Lawrence, January 17, 1929, the son of Arthur and Florida (Maurice) Larochelle. Richard attended Mount Carmel and Tenney High School in Methuen. He served in the Navy on the USS Putnam and later joined the Army Reserves at Fort Devens. After discharge, he went to Industrial Technical School in Boston for air conditioning and refrigeration. He worked at Heald Machine in Worcester and retired from American Can in Fitchburg in 1991. He was a life member of the Shirley Rod and Gun Club as well as a member of the American Legion. He frequented the Shirley Senior Center and had served as a member of the Shirley Council on Aging. He enjoyed playing bridge, gardening, boating, fishing, and reading. He is survived by his beloved wife Jeannette (Levesque) Larochelle of over 67 years, daughters Patricia Tarantino of Norton and Annette Moore of Ayer, and son Richard Larochelle and his wife Suzanne of Lunenburg, grandchildren Daxton Tarantino, Philip Tarantino & wife Krys, C Jonathan Moore, Todd Moore & wife Shannon, Chelsie McCarthy & husband Joseph, Spencer and Claudia Larochelle, as well as five great-grandchildren, Rocco, Riley, Jamie, Reese, and Lucas, sister Mary Kavanaugh, and brother-in-law Alphee Levesque and his wife Doris. He was predeceased by his son-in-law Lee Tarantino of Norton, brothers, Arthur, George, Eugene Larochelle, and sister Dorothy Conrad of Lawrence. Memorial contributions may be made to the Dana-Farber Cancer Institute, Boston or Nashoba Nursing Service and Hospice, Shirley.

The family of Richard L. Larochelle created this Life Tributes page to make it easy to share your memories.

Send flowers to the Larochelle family.