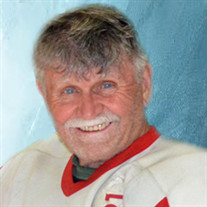 HARVARD: Richard B. Greene, 87, of Harvard formerly of Arlington and Woburn, found peace Wednesday, April 17, 2019 after a brave battle at Apple Valley Center, in Ayer, Mass. Dick was born in Cambridge, July 13, 1931, a son of Harold and Evelyn (Senter) Greene and resided in Harvard for almost fifty years. During the Korean Conflict Dick served his country in the United States Navy at the age of 17 from July 28, 1949 to January 18, 1953 as a Quartermaster Petty Officer 3rd Class on board the USS Benner DD807 and USS DASHIELL DD659. . Dick grew up in Arlington, he attended Arlington High School, and upon completion there, attended the Longfellow School in Cambridge, Mass. He was employed as a commercial artist at Humphrey, Browning, & McDougal upon retirement. Prior to that, he worked as an architect for many years. He was always very committed to his family & his family will cherish that forever. During all his free time while working full time & raising a family, he built the house that would be the foundation to start of the Greene family! Dick was an avid hockey player whom skated three days per week until age 85 and played for the Central Mass Rusty Blades – an age 70+ senior tournament team who travelled throughout the United States & Canada. Dick Greene played, coached, and designed many team logos over the years, most notably the Bud Light Olde Knights Logo. His dedication and commitment to the game will leave an impact on & off the ice forever. He is also a proud member of the Old Timers Ice Hockey Hall of Fame at the Wallace Civic Center. He leaves three daughters, Cheryl A. Price of Lunenburg and her companion Alan C. Frechette of Leominster, Sheila J. Greene-Day and her husband, David, of Fitchburg, Carol-Anne Wegener of Florida; a brother, Harold Charles Greene, of Arlington, several loving nieces, nephews, and seven grandchildren, Richard Greene (named after his Grandfather), Michael Wegener, Tanner Price, Kayla Wegener, Tyler Price, Nicholas Day, and Kimberly Day. Dick also leaves his three stepsisters and a stepbrother, Jerri (Jeraldyne) Greene, Jackie (Jacqueline) Popovich, Judy (Judith) Gauthier, and Jeff (Jeffrey) Greene, He was predeceased by his son, Brian R. Greene on February 24, 2009, Dick’s wife, Joan M. (Ford) Greene, March 22, 2009 and his daughter, Donna M. Greene-Swann, November 16, 2009. Dick’s family will receive friends and family at a visitation from 4-7 PM on Wednesday, April 24, 2019 with a ceremony by the United States Navy & family at 5:30pm in the funeral home. We thank Mr. Greene for his service to our country along with anyone else who has served. All of the kids (1st & 2nd generation) would also like to thank our Father/Grandfather for everything he taught us about life and for always supporting us. You’ll be missed but will forever live on in our hearts. All services will be held at the Anderson Funeral Home, 25 Fitchburg Rd., and (Rte. 2A) Ayer. Please see www.andersonfuneral.com for additional information or to leave an on line condolence. Dick’s family would also like to extend their heartfelt gratitude to the doctors, nurses, and the entire team who cared for Dick throughout his stay at Nashoba Valley Medical Center, Apple Valley Center and Compassus Hospice for the wonderful care afforded to Dick in his stay there. In lieu of flowers, please make a donation in Dick’s memory to Apple Valley Center’s Dementia Unit or any local animal shelter in need.

HARVARD: Richard B. Greene, 87, of Harvard formerly of Arlington and Woburn, found peace Wednesday, April 17, 2019 after a brave battle at Apple Valley Center, in Ayer, Mass. Dick was born in Cambridge, July 13, 1931, a son of Harold and Evelyn... View Obituary & Service Information

The family of Richard B. Greene created this Life Tributes page to make it easy to share your memories.

HARVARD: Richard B. Greene, 87, of Harvard formerly of Arlington...

Send flowers to the Greene family.