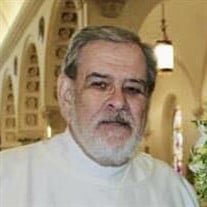 Reverend Deacon James Bernard Couture, 81, of Fitchburg, MA, passed into the arms of his heavenly father on Tuesday, April 27, 2021 with his loving family beside him. He was born in Fitchburg to the late William E. and Freida O. (Spitzer) Couture. He attended Notre Dame Preparatory High School and Fitchburg State University. Deacon Jim was the co-owner and President of the former M.C.M. Furniture and Appliance Company in Leominster, which was started by his father in 1939. He enjoyed a fifty-year career at M.C.M. and helped to grow the business along with his siblings, Janice, John, Bill, and Carolyn. Although Deacon Jim had sought a religious vocation in his earlier years, his father convinced him that he needed his excellent salesmanship at M.C.M. Many years later, Jim still realized he had a calling to a religious vocation and decided to embark on the path to become a Deacon, a path that would require his wife to endorse his choice as she was also required to attend theological classes. He completed his theological studies in the Diocese of Worcester and was ordained into the Diaconate on December 8th, 2001. Deacon Jim’s first assignment was as a Deacon and Administrator to St. Francis of Assisi in Athol, MA and St. Peters in Petersham, MA. He next served as a Deacon at Holy Rosary in Gardner, MA. Deacon Jim then returned to his lifelong parish of St. Joseph’s Church in Fitchburg (Cleghorn) where he spent the next sixteen years until his recent retirement. Deacon Jim helped facilitate the sale of St. Joseph’s School and advised on financial matters for the church in addition to his pastoral duties. His most joyous accomplishment as a Deacon was bringing over 300 babies and young adults into the Catholic faith through the sacrament of Baptism. Deacon Jim was a member of the Knights of Columbus Council #99 and served as President of the St. Joseph School Association and the St. Joseph Parish Council. Deacon Jim and Ruth established a charitable foundation and through that supported many charities including Indian Mission Schools as well as multi denominational organizations. Deacon Jim also enjoyed watching his beloved New England Patriots and Boston Red Sox and relished their championships in the past twenty years. His hobbies included gardening, golfing and in his earlier years enjoyed extensive international travel. He leaves his loving wife of sixty-one years, Ruth Ann (Hallock); a son Michael and his wife Barbara of Fitchburg; two daughters, Mary-Catherine Dennehy and her husband Jonathan of Dublin, Ireland (formerly Ashburnham, MA), and Heidi Couture of Fitchburg, MA. He leaves five grandchildren, Mark Couture (Jackie), Jessica Lawrence (Randy), Zephaniah Callwood (Brianna), Olivia Callwood, and Seamus Dennehy. He also leaves great-grandchildren, Tai and Lola Couture, William and Nicolas Lawrence, Kaia and Korra Callwood and Avery McDougal. He leaves two sisters, Carolyn Normandin and Janice Greenberg (Peter). Deacon Jim also leaves many cousins, nieces, nephews, and good friends. He is predeceased by a daughter, Lorinn Couture, his parents and three brothers, William, Donald and John Couture. Calling hours will be held at St. Joseph’s Church in Fitchburg on Monday, May 3rd from 4:00 p.m. to 7:00 p.m. A prayer Vigil will be held that evening at 7PM. Due to COVID protocols, a private funeral Mass will be held. In lieu of flowers, donations may be made to St. Vincent de Paul Society in care of St. Joseph’s Church in Fitchburg, MA. The Isabelle & Anderson Funeral Home, 316 Clarendon St., Fitchburg is assisting the family with the funeral arrangements. For further information or to leave an online condolence please visit their website at www.andersonfuneral.com Deacon Jim's Funeral Mass will be recorded, and available to view Tuesday afternoon at the link below: https://my.gather.app/remember/reverend-deacon-james-couture

Reverend Deacon James Bernard Couture, 81, of Fitchburg, MA, passed into the arms of his heavenly father on Tuesday, April 27, 2021 with his loving family beside him. He was born in Fitchburg to the late William E. and Freida O. (Spitzer) Couture.... View Obituary & Service Information

The family of Reverend Deacon James Bernard Couture created this Life Tributes page to make it easy to share your memories.

Send flowers to the Couture family.