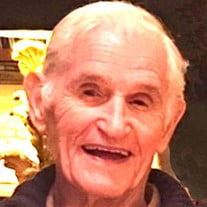 FITCHBURG - Raymond Scruggs Atkinson, 91 years 8 months, died peacefully at his home Tuesday evening, September 18. Son of Clarence and Janie (Moore) Atkinson of Danville, VA, he leaves his daughter Tricia Traxler Margles and husband, Dr. Steven W. Margles of Winchester, MA, his son Ray Allan Atkinson and wife, Sandy Atkinson of Fitchburg. Four granddaughters Cheri Perrault, Tina Love, Carlye Atkinson and Alissa Atkinson and four great grand children. Raymond served in the Army, stationed in Germany in the late 1940’s. There he met and fell in love with Katherine Guenther who became his wife and partner of over 60 years. He learned to speak German beautifully because Katherine declined to tell him she could speak English. He was very determined to win her over. While in the military, he traveled all over Europe and had stories of happy accidents such as missing the train to Germany from Paris and then having to hitchhike and sightsee the distance but still getting to his destination on time avoiding being declared AWOL. While in the Service, Raymond developed a life-long regimen of exercise and diet which served him well and contributed mightily to his longevity. He was happy to expound on the benefits of juicing whenever he saw an opportunity to add the subject to any conversation. He was part of the ‘Greatest Generation”, a true Renaissance Man who could fix anything, often baffling contractors with his ingenuity. He faithfully provided care for Katherine during her terminal illness. He was always happily included in any and all social functions, even making the hour drive to Winchester up until recently. Festivities included many dinner parties and high holiday feasts with family and friends where he was a stimulus for interesting conversation. He was a great diplomat and could deftly diffuse political differences and was a voracious reader keeping up with world events. Raymond’s kindness and friendly demeanor shone and made it easy for him to make friends and put others at ease. He had a natural country knowledge and was very kind and especially helpful to the ‘older’ folks in his community often offering rides to appointments. He gallantly made repairs for friends extending the practical life of things which otherwise would have been replaced; these skills arose from his experiences growing up during the Depression. Our old Dad, as we called him, will always be sorely missed by his family and all who knew him. His sharp mind lasted till the very end. He was grateful when we relayed to him that his friends told us to remind him in his final hours what a privilege it was to know him. We are sure Raymond is now with his loved ones and his faithful companion, Duke. The family will have a private service for Raymond. The Isabelle & Anderson Funeral Home is assisting the family with the funeral arrangements. For further information or to leave an online condolence please visit their website at www.andersonfuneral.com.

The family of Raymond S. Atkinson created this Life Tributes page to make it easy to share your memories.

Send flowers to the Atkinson family.