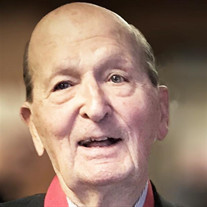 SHIRLEY: Ralph J. Lambert, 89, of Shirley, died peacefully with his family on Thursday, December 19, 2019 at University of Massachusetts - Memorial Hospital, Worcester. Mr. Lambert was born in Shirley, June 14, 1930, a son of Ralph A. and Cecile F. (Boisvert) Lambert and was a lifelong Shirley resident. In the mid 1950’s, Mr. Lambert served his country in the United States Army. Mr. Lambert was a 1952 graduate of St. Anslem’s College, receiving a Bachelors Degree in Chemistry. He continued his education at Boston College where he received a Masters Degree in Chemistry and in 1959 received his teaching degree in education from Loyola University in New Orleans, LA. He continued his postgraduate education studies at WPI in Worcester and Notre Dame University, South Bend, Indiana. For 20 years, Mr. Lambert taught chemistry in the Gardner, Groton and Ashby school systems, retiring in 1979. He then spent thirteen years as the food service supervisor at the Robert F. Kennedy Action Corps in Lancaster. He was a daily communicant at St. Anthony’s Church in Shirley and a member of the Holy Name Society there. Recipient of the Cheverus Award medal, he was also a member of the Knights of Columbus. Mr. Lambert was a Golden Anselmian - 50 year graduate. For nearly 20 years, he served as a volunteer at Fallon Clinic in Leominster. He leaves his wife of 64 years, Patricia (McVey) Lambert; a son, James Kevin Lambert of Dracut and his wife Colette; daughter, Twyla M. Lambert Clark of Nashville, TN, and her husband Mike; daughter, Karen J. Dorval of Shirley and her husband Mark; daughter, Paula J. Perkins of Columbus, OH, and her husband Michael; daughter, Donna L. Crowe of Lunenburg and her husband Richie; daughter, Lynda H. Casey of Leominster and her husband Sean; two brothers, Donald A. Lambert and Edward P. Lambert both of Florida; two sisters, Dorothy M. Esposito of Florida and Sylvia A. Callahan of Leominster; nine grandchildren, five step-grandchildren, one great-grandchild and four step-great-grandchildren. A Funeral Mass will be celebrated 10 AM Monday, December 23, 2019 at St. Anthony’s Church, 14 Phoenix Street, Shirley. There are no calling hours. Burial will be held privately in the spring. In lieu of flowers, memorial contributions may be made to St. Anthony's Church, PO Box 595, Shirley, MA 01464. The Anderson Funeral Home, 25 Fitchburg Rd, Ayer is assisting the family with arrangements.

SHIRLEY: Ralph J. Lambert, 89, of Shirley, died peacefully with his family on Thursday, December 19, 2019 at University of Massachusetts - Memorial Hospital, Worcester. Mr. Lambert was born in Shirley, June 14, 1930, a son of Ralph A. and... View Obituary & Service Information

The family of Ralph J. Lambert created this Life Tributes page to make it easy to share your memories.

Send flowers to the Lambert family.