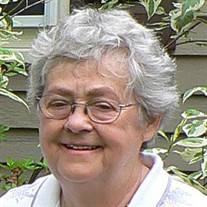 Ayer: Phyllis E. (Garvin) Robinson, 82, a longtime resident of Third Street, Ayer, and Wayside Park, Shirley, died Tuesday, November 13, 2018 at Apple Valley Center, Ayer. Mrs. Robinson was born in Manistique, Michigan on January 13, 1936, to the late Walter E. Garvin and Helen I. (Jones) Selling and was the stepdaughter of the late John M. Selling. In the mid 1950’s Mrs. Robinson served her country in the Women’s Army Corps. Mrs. Robinson resided most of her life in Ayer. She worked at Ayer High School for many years while raising her family. She was an active member of the community who served as both a Boy Scout and Girl Scout leader and attended St. Andrew’s Episcopal Church in Ayer. In later life, Mrs. Robinson enjoyed sharing her interest in gardening with her grandchildren who were the light of her life. She leaves her daughter, Terri L. DeAngelo of Atkinson, NH; four sons and daughters-in-law, Jeffery A. and Maureen A. Robinson of Leominster, John N. and Judith E. Robinson of Groton, David D. and Linda C. Robinson of Shirley, Gregory M. and Kelly A. Robinson of Ayer; a brother, Michael J. Selling of Arizona; and a sister, Marylyn J. Baker of Florida. She also leaves eight grandchildren. She was predeceased by her husband, Norman A. Robinson in 2003, and her brother, Kenneth E. “Jim” Garvin of Ayer in 2014. Funeral services will be held privately. The Anderson Funeral Home, 25 Fitchburg Rd., Ayer is assisting the family with arrangements. Please see www.andersonfuneral.com for additional information or to leave an on line condolence.

The family of Phyllis E. Robinson created this Life Tributes page to make it easy to share your memories.

Send flowers to the Robinson family.