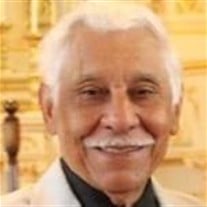 GROTON-Pedro W. Perez-Sanchez, 87, of Groton, died Wednesday afternoon, January 29, 2020, in his home surrounded by his loving family. He was born in Santurce, Puerto Rico, on September 29, 1932, a son of the late Pedro Perez and Vicenta (Sanchez) De La Cruz. He began his military career as part of the United States National Guard in 1954 and was then drafted in the United States Army where he served until his retirement in 1974. During his time in the military, he and his family appreciated the opportunity to travel and live in different states and in Europe. He achieved the rank of Sergeant First Class in the U.S. Army, having served in the Korean War and two tours of duty in Vietnam. Being a distinguished soldier, he was awarded two Bronze Star Medals, The Army Commendation Medal, The Good Conduct Medal, The Army of Occupation Medal, The National Defense Service Medal, The Vietnam Service Medal, and The Vietnam Campaign Medal. He was also decorated as Soldier of the Year on two separate occasions. Following his retirement from the Army he worked for the Civil Service at Fort Devens in the engineering and housing department. Pedro loved being outdoors, working with animals, and spending time with his wife, children, and grandchildren. He exemplified a love of service to others and passed that on to his children. For the last 30 years he owned, trained, and raced thoroughbred horses at racetracks in Massachusetts, Maryland, and New Hampshire. He had been a member of the Masons for many years. He leaves the love of his life and wife of 65 years, Carmen L. (Vizcarrondo) Perez of Groton; three sons and their spouses, Wigberto Perez and Esther Perez of Fitchburg, Walter Perez and Jo-Ann Perez of Clinton and Rafael A. Perez and Theresa Perez of Winchendon; a daughter and her spouse, Ivonne Perez and Eric M. Monroe of Leominster; a brother, Rafael De La Cruz and a sister Esther Pérez-Cruz both of Puerto Rico; 12 grandchildren, Elisa Perez, Calvin Perez, Marcus Perez, Elizabeth Perez, Sarah Perez, Faith Perez, Mary Perez, Rafael J. Perez, Melissa Capotosto, Jason Perez, Jordan Monroe and Jennifer Lavoie; 5 great grandchildren, a great-great granddaughter and many nephews and nieces. He is predeceased by twin daughters, Yvette and Yolanda Perez; two brothers, Joaquin Perez and Wilfredo Perez and sisters, Edna Perez and Angeles Perez and a granddaughter, Kristen Perez His funeral service will be held on Wednesday, February 5, at 9:30 AM in the Anderson Funeral Home, 25 Fitchburg Rd., Ayer. Burial will be in the Massachusetts Veterans Memorial Cemetery in Winchendon. Calling hours in the funeral home will be held on Tuesday, February 4, from 5-8PM. The Perez Family would like to sincerely thank their fathers’ doctors, Dr. Narayansami and Dr. Khodabandeh and the staff of Emerson Hospital. We would also like to thank his hospice nurse, Daisy Medina and Bob Johnson, Veterans’ Services Officer, Town of Groton, Massachusetts. In lieu of flowers memorial contributions may be made to Mass General Cancer Center at Emerson Hospital, 133 Old Road to Nine Acre Corner, Concord, MA 01742. For further information or to leave an online condolence please visit www.andersonfuneral.com

GROTON-Pedro W. Perez-Sanchez, 87, of Groton, died Wednesday afternoon, January 29, 2020, in his home surrounded by his loving family. He was born in Santurce, Puerto Rico, on September 29, 1932, a son of the late Pedro Perez and Vicenta (Sanchez)... View Obituary & Service Information

The family of Pedro W. Perez-Sanchez created this Life Tributes page to make it easy to share your memories.

Send flowers to the Perez-Sanchez family.