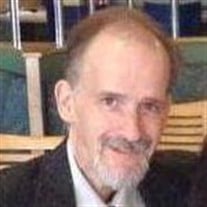 Paul A. Martel, 58, of Shirley, died on Sunday, September 15, at his home in Shirley. He was born in Pawtucket, RI, on November 2, 1960 a son of the late Armand and Estelle (Bernier) Martel. Paul graduated from St. Raphael Academy in Pawtucket, RI and received his bachelor’s degree from the University of Rhode Island. Paul was a computer engineer at VoltDB in Bedford. He gave of his time and resources generously to different charities and organizations. Paul was a long-time volunteer in several capacities with Loaves and Fishes Food Pantry in Devens. He also volunteered for the robotics club at Ayer Shirley Regional Schools. Paul was always looking to help others along with his wife, Elizabeth Taylor Martel. They believed in spreading the good work of the Lord and dedicated their lives to this mission. They loved the people in their lives deeply. Paul's wife, Elizabeth (Taylor) Martel died on January 18th of this year. Paul is also preceded in death by his Dad, Armand Martel and nephew, Timothy Letellier. He is survived by his Mom, Estelle Martel, his stepdaughter, Tamsin Hall and siblings, Susan Letellier, Jacqueline Wagner, Denise Barney, Cynthia Ferreira and her husband Joseph, Gerald Martel and his wife Cate. He also leaves many nieces and nephews and great nieces and nephews. Paul also leaves behind many close friends who he loved deeply, including Tatiana Taracena of Shirley, Debra Holloway and her family, David Arms, Louis and Luz Cruz. Paul had a great sense of humor. He enjoyed spending time with his family and his friends and had a great love of music and games. A memorial service will be held on Tuesday, September 24, 2019, at 10AM in the Shepherd of the Valley Lutheran Church, 21 Washington St., Ayer. There are no calling hours, The Anderson Funeral Home, 25 Fitchburg Rd., is assisting the family with the funeral arrangements. For further information or to leave an online condolence please visit www.andersonfuneral.com. In lieu of flowers, memorial contributions may be made to Loaves and Fishes, 234 Barnum Rd., Devens, MA 01434.

Paul A. Martel, 58, of Shirley, died on Sunday, September 15, at his home in Shirley. He was born in Pawtucket, RI, on November 2, 1960 a son of the late Armand and Estelle (Bernier) Martel. Paul graduated from St. Raphael Academy in Pawtucket,... View Obituary & Service Information

The family of Paul A. Martel created this Life Tributes page to make it easy to share your memories.

Send flowers to the Martel family.