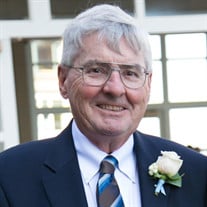 AYER: Paul David Bresnahan, 80, of Ayer, passed away peacefully on Friday, October 22, 2021, surrounded by his family, after an ongoing battle with Parkinson’s Disease. Paul was born on April 4, 1941, and grew up in Shirley. After graduating from Notre Dame High School in Fitchburg, he went on to obtain an undergraduate degree in Accounting from St. Anselm’s College in Manchester, NH and subsequently a MBA from Clark University, Worcester. In 1967, Paul married the love of his life, Louise A. McGuane, and they went on to enjoy 54 years of marriage together. He took pride in his faith, community connections, unbeatable toastmaster skills and unending love and appreciation for his family and friends. After 27 years, Paul proudly retired from Digital Equipment Corporation in 1994. He then went on to work as a manager of the Devens Conference Center and finally a Financial Advisor at his own practice on Main Street in Ayer. In addition to his career, Paul devoted much of his time to the community. He started the Saturday recreational basketball program for Ayer youth in the late 1980’s, was a Town of Ayer Selectmen for nine years, board member and Chairman at North Middlesex Savings Bank for 25+ years, Advisory Board member of Nashoba Valley Medical Center and a member of the Ayer High School Council. One of his later elected positions was to the Board of Assessors. Overall, he was a town leader and the model good citizen devoted to service to others in his community. Paul’s many loves included spending time with his close friends. It could have been golfing, grabbing a beer at the Piccolino or Nashoba Club, enjoying a fresh lobster in Seabrook, cheering on the Boston College Eagles in section QQ or hosting a barbeque on Sandy Pond with boating and water skiing. Paul is survived by his loving wife of 54 years, Louise A. (McGuane) Bresnahan. He is also survived by his many loving family members, including his children, David and his wife Maura Bresnahan of Newton, Betsy and her husband Timothy Dolan of Ayer, Paula and her husband Stephen Janes of Groton, and James and his wife Mandy Bresnahan of Ayer; his brother, Joseph Bresnahan; grandchildren, Abby, Olivia, Jack, Shane, Michael, Jane, Kevin, Teaghan, and Callan; as well as his beloved nieces, nephews, and family. He was predeceased by his father, John T. Bresnahan, Sr., mother, Helen F. Bresnahan; his brother, John T. Bresnahan; and his niece, Janis Bresnahan. Calling Hours at Anderson Funeral Home, 25 Fitchburg Road, (Rte. 2A) Ayer will be held Thursday, October 28th, from 4 to 7 pm. A Mass of Christian Burial will be held at St. Anthony of Padua Church, 14 Phoenix Street, Shirley on Friday, October 29th at 11:00 AM. In lieu of flowers, please consider a donation in Paul’s name to The Michael J. Fox Foundation for Parkinson’s Research. www.michaeljfox.org. For additional information or to leave an online condolence please visit their website at www.andersonfuneral.com.

AYER: Paul David Bresnahan, 80, of Ayer, passed away peacefully on Friday, October 22, 2021, surrounded by his family, after an ongoing battle with Parkinson&#8217;s Disease. Paul was born on April 4, 1941, and grew up in Shirley. After graduating... View Obituary & Service Information

The family of Paul D. Bresnahan created this Life Tributes page to make it easy to share your memories.

Send flowers to the Bresnahan family.