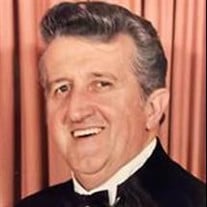 Nashua, NH: Paul A. Beausoleil, 80, passed away peacefully on February 20th in his home at Nashua Crossings surrounded by close family. He was the loving husband of Judith (Delisle) Beausoleil for 33 years. A loving husband, father and grandfather, Paul was born on August 1, 1940 in Lowell, MA to the late Henri and Marie (Tanguay) Beausoleil. The youngest of six, he was predeceased by his two brothers, Roland and Donald; and his three sisters, Cecile Ayotte, Doris Reed, and Alice Holland. Paul grew up in The Acre and attended St. Joseph's High School in Lowell. He was a proud veteran of the US Navy, where he served on the ship, USS William V Pratt. After his military service, he worked for the Coca-Cola Bottling Company in Lowell for over 20 years and was later employed by both Anheuser-Busch and Twin Mountain Spring Water Company in Merrimack, NH. Always wanting to stay busy, Paul enjoyed his work and comradery in the Garden Center at Walmart in Amherst, NH during his retirement. He had a curious “knack” of going missing as Santa arrived during many holiday gatherings. Paul had tremendous pride in the accomplishments of his children and grandchildren. He enjoyed his days coaching baseball and was a frequent attendant on the field, in the bleachers, and at dance recitals for his favorite people. Through thick and thin, he was an avid Boston sports fan especially of the Red Sox and Patriots. While in the Navy, he once tossed a football with Hall of Famer Roger Staubach. He had fond memories of spraying a ball all over the golf course with his sons, his family and friends. Paul’s love for music was evident throughout his life. He was the lead guitarist and back-up singer for a local band, The Cupids, in the 50’s. He liked to entertain by playing his guitar for friends and family. He had a great sense of pride for world-renowned singer Celine Dion, a relative on his mother’s side. He was a devoted fan, attended several concerts and even met her backstage. Always the life of the party, his numerous stories and endless puns humored all, especially himself. He loved any word play and was a Scrabble enthusiast. At Nashua Crossings, Paul was known as “Mr. Mayor” and led a weekly sing-along group. With his voice, smile, and sense of humor he charmed the hearts of residents and staff alike. His family is very appreciative for the excellent care and compassion that the staff provided him. In addition to his wife, he is survived by his three children: Brian Beausoleil and his wife Hazel of Dracut, MA, Jay Beausoleil and his girlfriend Erika of Dracut, MA, and Michele Desmarais and her husband Richard of Pelham, NH. Two stepchildren: Kimberly Coumas and her husband Michael of Hudson, NH, and Edward MacDonald and his wife Carla of New Hampton, NH. He leaves behind his beloved 14 grandchildren: Briana and Maya Beausoleil; Nicole and Aidan Beausoleil; Ashley, Dylan, Devin, and Justin Desmarais; Kyle, Kaitlin, and Kristen Coumas; and Teren, Ian and Arabella MacDonald; as well as numerous nieces, nephews and friends. A Funeral Mass honoring Paul will be held at 10am on Wednesday, March 3rd at St. Joseph the Worker Church, 777 West Hollis St, Nashua, NH. A private military burial will be held on a later date. In lieu of flowers, we encourage you to turn on some 50s music, buy yourself and your loved ones a cup of coffee or a cold drink, and enjoy some quality time together in Paul’s honor.

Nashua, NH: Paul A. Beausoleil, 80, passed away peacefully on February 20th in his home at Nashua Crossings surrounded by close family. He was the loving husband of Judith (Delisle) Beausoleil for 33 years. A loving husband, father and grandfather,... View Obituary & Service Information

The family of Paul A. Beausoleil created this Life Tributes page to make it easy to share your memories.

Nashua, NH: Paul A. Beausoleil, 80, passed away peacefully on...

Send flowers to the Beausoleil family.