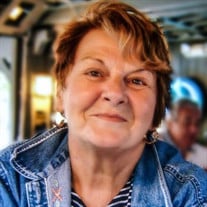 LITTLETON: Patricia M. (Matthews) Kolarik, 75, of Littleton, formerly of Shirley, died peacefully Friday evening, March 13, 2020 at the Care Dimensions Hospice House, Lincoln MA. Mrs. Kolarik was born in Forres, Scotland, United Kingdom, February 24, 1945, the second of four children of Gordon and Helen M. (McKay) Matthews. Before moving to Littleton 4 years ago, Patricia had resided in Shirley for over 20 years with her husband, Francis (Frank) L. Kolarik, Jr., who died in September 2013. Pat was raised in Geraldton, Ontario and at the age of 16 left school to work as a hairdresser. While on a visit to the United States she met Frank, and they were married on January 18, 1964. They raised two children: Francis (Frankie) and Leslie. As an Air Force family for nearly 30 years, they moved often and lived in Washington, Ohio, Texas, Maryland, Massachusetts and Wiesbaden Germany. It was in the Air Force that she recognized her love of traveling, exploring new places and meeting and welcoming new people. With an outgoing personality and welcoming approach, Pat enthusiastically embraced the role of homemaker and Air Force Officer’s wife. She was always looking to help others and make them feel welcomed in her home, at an event or in the community. Pat continued sharing her warmth and generosity after they left the Air Force. She was known for her kind and generous spirit, a strong sense of humor and mischief, and keeping her family and friends her priority. When not hosting or organizing events, she worked at times as a hairdresser and as an administrative assistant. In addition to traveling, she enjoyed playing golf, bowling, listening to music and was a member of the Red Hat Club. Although increasingly difficult, she continued to travel during her last year, making road trips to Manhattan in NYC, Burlington VT, North Conway, NH and Hilton Head, SC. She was a member of St. Anne’s Church in Littleton and had formerly attended St. Anthony’s Church in Shirley. She leaves her son, Francis L. Kolarik, III of Cambridge, a daughter and son in law, Leslie A. and Tony Willson of Dunstable; a brother, Gary Matthews of Nashua, NH; a sister Heather D. Murray of Hyde Park, NY and two grandchildren, Emily Willson and James Willson. A funeral Mass will be celebrated at a day and time to be announced at St. Anne’s Church, 75 King Street, Littleton. Memorial contributions may be made to Care Dimensions Hospice, 75 Sylvan Street, Suite B-102, Danvers, MA 01923 or at www.caredimensions.org The Anderson Funeral Home, 25 Fitchburg Rd., Ayer is assisting the family with arrangements. For additional information or to leave an online condolence, please visit their website at www.andersonfuneral.com.

The family of Patricia M. (Matthews) Kolarik created this Life Tributes page to make it easy to share your memories.

Send flowers to the Kolarik family.