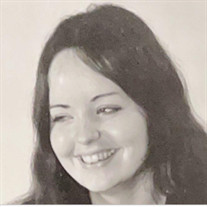 ASHBY – Patricia A. “Patty” (Burke) Mains, 67, of Ashby, passed away on Friday, April 1, 2022 after a long battle with Primary Progressive Aphasia. Prior to her sickness, she was a creative free-spirited woman, talented artist (often referring to herself as “Artsy Fartsy”), and was well known for her award-winning and incredibly delicious baking. She had an infectious laugh and a love for music, movies and makeup. Born in Needham on July 14, 1954, Patricia was the daughter to the late Leonard F. and her surviving mother, Patricia A. (Seery) Burke. In addition to her father, Patricia was predeceased by her husband Kimberley Mains. In addition to her mother of Needham, Patricia is lovingly survived by her son, Joshua K Mains and his wife, Carolyn, of Ashby; her daughter, Hillary Shannon Marchand and her husband, Frederick, of Hubbardston; her brother, Leonard L. Burke and his wife, Kyung-Mee of Attleboro; her grandchildren, Lucas Mains, Tyler Marchand and Dylan Marchand all of which she adored beyond measure. She is also survived by many cousins, nieces and nephews. She was a devoted congregant of the Kingdom Hall of Jehovah’s Witnesses in Pepperell. As one of Jehovah’s Witnesses, she believed in a positive hope for the future as promised in the Bible such as at Rev 21:3-5. At the family’s request, Patricia’s services are private. In lieu of flowers, donations may be made in Patricia’s memory to the Kingdom Hall of Jehovah's Witnesses in Pepperell at www.donate.jw.org. Arrangements are under the direction of T.J Anderson & Son Funeral Home, 250 Main Street, Townsend. For information or online condolences, please visit www.andersonfuneral.com

The family of Patricia A. (Burke) Mains created this Life Tributes page to make it easy to share your memories.

Send flowers to the Mains family.