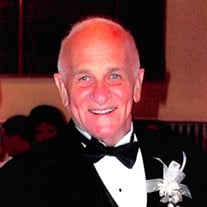 FITCHBURG – Norman A. Richard, 87, formerly of Clearview Avenue, Fitchburg, died Saturday, March 2, 2019 at his home in Leominster. He was born in Fitchburg on February 18, 1932, and was the son of Joseph and Sara (Belliveau) Richard. For over 35 years, Norman worked at Fitchburg Gas & Electric Co., retiring in 1996. He was a member of St. Joseph’s Parish, where he also attended school, and was a member of the Knights of Columbus. Following retirement, Norman volunteered his time at Fitchburg Access Television. He also took great pleasure in attending his two grandsons’ baseball games. While there, he arrived well-equipped with plenty of candy –mainly Tootsie Rolls- to pass out to other spectators. This was done often, and his new nickname became “The Candy Man.” Norman leaves his wife of 65 years, Lillian A. Richard; his son, Kenneth J. Richard and wife Jeannie, of Dove Canyon, CA; his daughter, Lisa A. Richard and husband Jeff, of Leominster; his five grandchildren: Jake, Josh, Andrew, Christine, and Daniel; his three great grandchildren: Marco, Ariela, and Waylon. Norman was predeceased by his brothers Clarence, Robert, Leo and his sister Irene Collette. The family would like to thank Norman’s dedicated caregivers Jane, Natacha, and Megan, and former caregiver, Miguel. They would also like to thank the nurses at Health Alliance Home Health & Hospice and Better Care Home Health. A funeral mass will be celebrated at 11 AM on Wednesday, March 13, 2019 at St. Joseph’s Church, 49 Woodland Street, Fitchburg. Burial will be in the parish cemetery. A calling hour will be held from 9:30AM - 10:30AM, prior to Mass, at Isabelle & Anderson Funeral Home, 316 Clarendon Street, Fitchburg. Please see www.andersonfuneral.com for additional information. In lieu of flowers, the family asks that you please send up a little prayer for Norman the next time that you enjoy a Tootsie Roll.

FITCHBURG &#8211; Norman A. Richard, 87, formerly of Clearview Avenue, Fitchburg, died Saturday, March 2, 2019 at his home in Leominster. He was born in Fitchburg on February 18, 1932, and was the son of Joseph and Sara (Belliveau) Richard. For... View Obituary & Service Information

The family of Norman A. Richard created this Life Tributes page to make it easy to share your memories.

Send flowers to the Richard family.