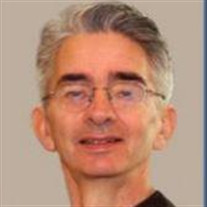 Father Norman H. Butler, M.S., 70, a Missionary of Our Lady of La Salette died on Palm Sunday, April 14, 2019, in Cordoba, Argentina, where he ministered for many years. Father Butler, son of the late Andrew and Yvonne (Thibeault) Butler, was born December 8, 1948. After completing high school at the La Salette Seminary in Cheshire, Connecticut, Father Norman earned an Associate’s Degree at the La Salette Seminary in Altamont, New York. He entered the La Salette Novitiate on July 1, 1968. Father professed First Vows in 1969 and continued his studies at Merrimack College in N. Andover, Massachusetts and earned a Bachelor of Arts Degree with a double major in Philosophy and English. In 1972, Father made his Perpetual Vows in Rome, Italy and studied Theology at Rome’s Gregorian University to earn an S.T.B. Degree in 1974. Father Butler was ordained to the Priesthood on May 17, 1975 at the La Salette Shrine Church in Ipswich, Massachusetts. He ministered as Chaplain and Teacher at Good Counsel High School in Wheaton, Maryland until he volunteered to serve in the La Salette Region of Argentina in 1979. Father Norman began his missionary work in Argentina as Assistant on the Pastoral Team, serving at Our Lady of La Salette Parish in Yofre Norte, Cordoba. In addition to serving the people of Argentina, Father devoted his energies in administrative positions. He was elected to the Regional Council of Argentina at various times as Secretary, Regional Superior, Regional Vicar and General Assistant Councilor for the La Salette Congregation at large. In the last year and a half, he was prevented by muscular dystrophy from engaging in pastoral ministry, but he used his time well; in prayer, reading, listening to music, solving Sudoku puzzles and producing some seventy paintings. Father is survived by two of his brothers who are also La Salette priests: Father Robert Butler, who also ministers in Argentina, and Father René Butler, who is Provincial Superior of the North American Province of Mary, Mother of the Americas. In addition, Father Norman is survived by his brother Roger and his wife Beverly of Oxford, MA and a sister Denise and her husband Laurence La Roche of Fitchburg, MA; as well as several nieces, nephews and many friends.

Father Norman H. Butler, M.S., 70, a Missionary of Our Lady of La Salette died on Palm Sunday, April 14, 2019, in Cordoba, Argentina, where he ministered for many years. Father Butler, son of the late Andrew and Yvonne (Thibeault) Butler, was... View Obituary & Service Information

The family of Fr. Norman H. Butler M.S. created this Life Tributes page to make it easy to share your memories.

Send flowers to the Butler family.